The Ivory Coast international was visibly upset as he was carried from the field only a few minutes after coming on as a substitute. 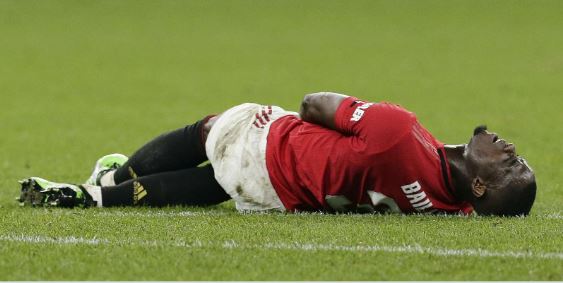 Eric Bailly
Manchester United’s pre-season preparations took a hit on Thursday as centre-back Eric Bailly was stretchered from the field during a friendly against Tottenham.
The 25-year-old, who has struggled with knee and ankle issues in the past, hurt himself in the process of stopping Heung-min Son from getting a shot away, only minutes after coming on as a half-time substitute.
He was replaced by 21-year-old Axel Tuanzebe, who has been eager for first-team opportunities ahead of the new Premier League season.
Injuries have dogged Bailly's United career since he joined the club from Villarreal in the summer of 2016, and he has struggled for consistency when he has played as a result.
He has made just 25 league appearances in the last two seasons, and his frequent unavailability is potentially a factor in United's well-publicised hunt for a new central defender.
The Harry Maguire saga shows little sign of relenting, while Tottenham defender Toby Alderweireld is available for just £25 million ($31.3m) - until Friday. The release clause in his contract expires at midnight on July 25, with Spurs likely to up their asking price if no clubs trigger the clause before then.
Bailly has already expressed his concern that a new signing would push him further down the pecking order at Old Trafford and this latest setback will come as a considerable blow.
For Tuanzebe, though, it could be exactly the opportunity he has been waiting for.
After spending last season out on a productive loan spell with promoted Aston Villa, the youngster is desperate for a chance to prove himself and has impressed manager Ole Gunnar Solskjaer in his pre-season outings so far.
With another busy season ahead and squad rotation to be expected, Tuanzebe may be targeting the Europa League as his gateway to the first team.
Speculation is still surrounding the futures of Paul Pogba and Romelu Lukaku, and Solskjaer would surely appreciate a youngster like Tuanzebe making his job easier by solving one of his squad's obvious weak points.
Following the Spurs friendly, United will face further pre-season tests against Norwegian side Kristiansund and AC Milan before starting their Premier League campaign at home to Chelsea on August 11.
Top Stories