The suspension came through a motion moved by the House Leader after Governor Udom Emmanuel had ordered a probe into the alleged assault. 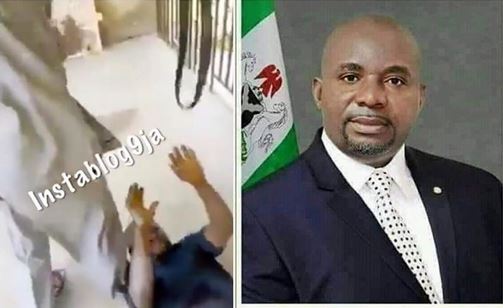 Godwin Abraham (left) was assaulted allegedly on the orders of Imoh Williams (right)
Akwa Ibom State House of Assembly on Thursday ordered the suspension of the chairman of Abak Local Government Area, Imoh Williams, for allegedly assaulting an artisan, Godwin Abraham, pending an investigation into the matter.

It was gathered that the artisan was tortured by the chairman’s aide for demanding the debt of N75000 owed him by the Council.

The chairman had since denied assault and had relieved the aide of his position.

Governor Udom Emmanuel had ordered a probe into the alleged assault.

Following the directives, the assembly immediately committed the case to its committee on Local Government and Chieftaincy Affairs to investigate the immediate and remote causes of the act and make recommendations to the house within one month.

The house also called on the Nigeria Police to fast track investigation on the criminal aspects of the matter.

Speaking with newsmen shortly after the plenary, the Chairman, House Committee on Information, Aniefiok Dennis said the steps were taken to redeem the image of the state and to ensure the protection of citizens of the state.

The lawmaker however assured that due process would be followed and the Abak Council Chairman would be given fair hearing before major decisions are taken on the matter.

“He said, “The seventh assembly owes every Akwa Ibom person, including the victim of that assault protection. But we want to assure the Abak Council Chairman and the people of Abak that he will be given the opportunity for fair hearing. We also want to sound a note of warning to other public officeholders that we would not tolerate any act of assault on members of the public”.
Watch the video below:
Top Stories