Shocking! Barber Dies While Trying To Rescue A Drowning Pig In Benue


A barber has reportedly died while he was trying to rescue a pig that was drowning in a Benue community. 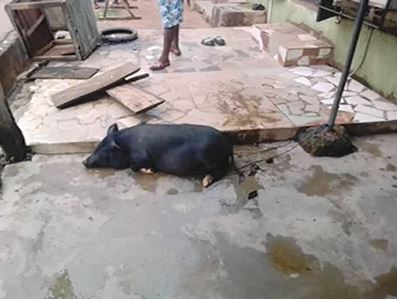 Photo credit: New Telegraph
According to a report by NewTelegraph, serious tragedy struck in the early hours of Thursday along Orshi Kur Street, Gboko East Local Government Area of Benue State during an early morning down pour when a young man collapsed and died immediately after rescuing a drowning pig from the gutter in front of his shop.
The 30-year old barber, who owns a shop at ‘One-Step Barbing Shop’ simply known as Tersur, was said to have abandoned his shop when he saw the pig in the gutter in front of his shop being swept away by the heavy flow of water.
A witness told New Telegraph that the late Tersur refused all entreaties to allow the pig perish.
He got a helper and they both swung into action and the pig was saved after being pulled out of the flood water.
What ordinarily looked like a good gesture from the young Tersur, however, turned tragic when he slumped immediately after taking the pig out of the gutter.
Top Stories