Joshua is expected to go straight into a second fight against new champion Ruiz Jr in an attempt to regain his world titles. 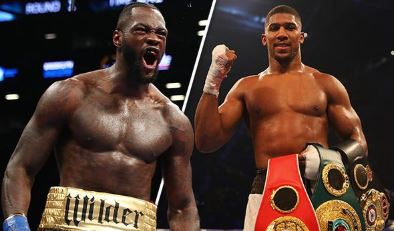 Deontay Wilder and Anthony Joshua
Anthony Joshua “gave up” against Andy Ruiz Jr and will lose the rematch but can still rebound, according to Deontay Wilder.
Joshua was shocked by underdog Ruiz Jr last month and lost his IBF, WBA and WBO heavyweight championships and his immediate hopes of an undisputed title fight with WBC champion Wilder.
“It is not over for Anthony. Just because you lose, it doesn’t mean it’s over,” Wilder exclusively told Sky Sports from the Fitzroy Lodge amateur gym in London.
“Even if he loses the rematch, which I feel he will.
“I don’t think he knows how he lost. He was knocked down four times. He gave up, in my opinion.”
Joshua is expected to go straight into a second fight against new champion Ruiz Jr in an attempt to regain his world titles.
“I wasn’t surprised,” Wilder reflected on the first Joshua vs Ruiz Jr fight.
“I was happy for Andy, for where the guy came from. Like a lot of us fighters, he was looking for the lottery tickets.
“He said: ‘mama, we ain’t got to struggle any more’.
“That touched me because we all come from some type of place. We are all trying to support our families. We are all looking for the meal ticket.
Top Stories