Soldier Arrested For Stabbing Driver To Death In Edo


The soldier, who was said to be on mufti stabbed the driver during an argument that ensued between them and later fled the scene to prevent being mobbed. 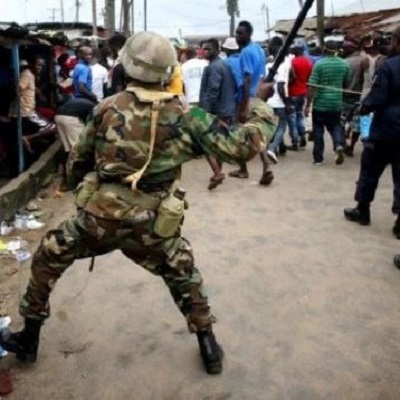 A Lance Corporal identified as Moses Oguche attached to the 4 Brigade Nigeria Army has been arrested by men of the Edo State Police Command for allegedly stabbing a driver to death.

The deceased driver simply known as Mr. Ogbimi works with the Big Joe Motors, Benin and had gone to Okenne, Kogi State to alongside a mechanic to repair a broken-down vehicle belonging to the company when the incident occurred.

Witnesses said trouble started when the towing van driven by the deceased driver had a collision with a silver colour Nissan Premera marked Abuja- KWL 811-AP belonging to the suspect.

The soldier, who was said to be on mufti stabbed the driver during an argument that ensued between them and later fled the scene to prevent being mobbed.

He was said to have been pursued by some passersby and later abandoned his car and ran into a bush at Agbede in Edo State.

Policemen in the area were alerted and they took him into custody along with his vehicle at Agbede Divisional Police Headquarters.

It was gathered that some armed soldiers stormed Agbede police station in two Hilux vans to rescue their colleague but were prevented by residents of the community and policemen on ground.

Police sources said the Commissioner of Police in Edo, DanMallam Mohammed ordered immediate transfer of the suspect to the state police headquarters in Benin City.

DanMallam Mohammed assured that justice would be served in the incident as nobody is above the law.

“The case is under investigation, is a case of murder, he is a Nigerian and he is not above the law.

“I assure that justice will be done in this case”, CP DanMallam stated.

He said, "The lost of life in this controversial circumstance is highly regrettable.  This is certainly not in line with the professional disposition of the Nigeria Army which places high premium on the sanctity of human lives. As alleged, this unfortunate circumstance will be thoroughly investigated and if established justice shall take it course. I want to reassure the general public of the safety of their lives and property”.

A staff of the transport firm who pleaded anonymity said the management and the deceased relatives have been invited by the police at the State Criminal Investigation and Intelligence Department (SCIID).
Top Stories