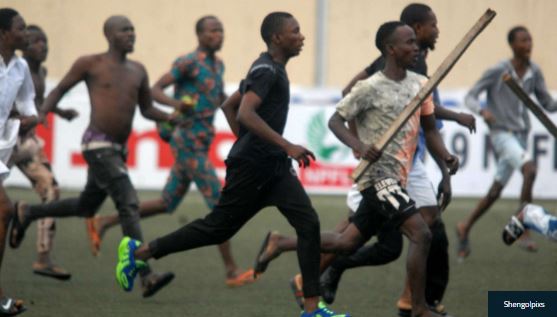 File Photo
Ugly scenes greeted the 2019 Federation Cup final at the Ahmadu Bello Stadium, Kaduna, where Kano Pillars defeated Niger Tornadoes 4-3 on penalties on Sunday.
According to the News Agency of Nigeria (NAN), security officials had to resort to the use of teargas to disperse rampaging Kano Pillars fans after their team’s victory.
The teargas used by the security officials led to pandemonium, as many inside the stadium scampered for safety, including the dignitaries who were present.
Those reportedly affected include the Kano State Governor, Abdullahi Ganduje, as well as an unidentified player who was driven away in an ambulance, and several fans who lost consciousness.
NAN reports that the trouble started when Kano Pillars fans allegedly broke the barricade to enter the pitch in order to celebrate with the players.
In an attempt to stop them and prevent them from disrupting the trophy presentation ceremony, the fans clashed with the security men on duty.
The high-handedness of the security officials infuriated the agitated fans, who fought back violently and wreaked havoc; destroying billboards, pitch panels, posters and many other objects within sight.
The medal and trophy presentation was suspended and later took place in a near-empty stadium after calm had returned to the venue.
Though the Nigeria Football Federation (NFF), the organisers of the Federation Cup, are yet to release any official statement, many fans are calling for stiff sanctions against Kano Pillars, whose fans are now notorious for violent conducts.
At the 2018 Federation Cup final in Asaba, Pillars fans destroyed seats at the then newly-built Stephen Keshi Stadium, as they watched their team blow a three-goal lead before losing to Enugu Rangers in the ensuing penalty kicks.
Also at the Nigeria Professional Football League (NPFL) championship play-offs in Lagos, the fans also unleased terror at the Agege Stadium, a development which led to heavy fines on Pillars and a 12-match ban for club captain, Rabiu Ali.
Top Stories