Over 1,000 Rendered Homeless As Flood Wreaks Havoc In Ilorin


Some of the victims, who were affected including traders; were trying to recover their damaged belongings from the flood. 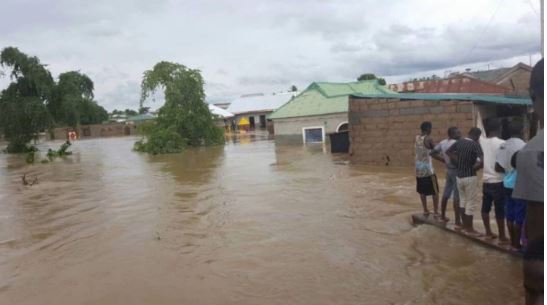 File Photo
A very heavy rainfall that lasted over three hours, had rendered over 1,000 residents of Odota area in llorin, the Kwara State capital, homeless.
The News Agency of Nigeria (NAN) reports that the rainfall started at about 11.p.m on Monday and lasted until 1 a.m on Tuesday flooding the whole area.
Some of the victims, who were affected including traders; were trying to recover their damaged belongings from the flood.
Several of them including children and aged persons have moved to houses of neighbours who were not seriously affected.
Some of the items damaged by the flood included clothing, furniture, household utensils, electronics and other assorted materials.
The Chairman of the Landlords Association in the affected areas, Alhaji Yahaya Olowo-Beki, who spoke with NAN, attributed the flood to lack of drainage after the completion of the Geri Alimi under pass.
He said: “the flooding has become constant occurrence being experienced in the area since the completion of the under pass.”
Olowo-Beki appealed to the Kwara State government to provide drainage at the sides of the under pass to curb the constant flooding in the area.
Alhaji Al-Amin Amasa, the permanent Secretary in the state Ministry of Environment, while reacting to the incident, attributed the flooding to lack of proper layout in the affected areas.
According to him, the flooding was not as a result of the construction of the under pass, but as a result of the failure of the affected residents to create water ways when building their houses.
Top Stories