Nicolas Pepe's Transfer To Arsenal Is 'Not Closed', Says Emery


Lille's president has claimed a move to London is imminent for the Ivorian, but the Gunners boss is more cautious. 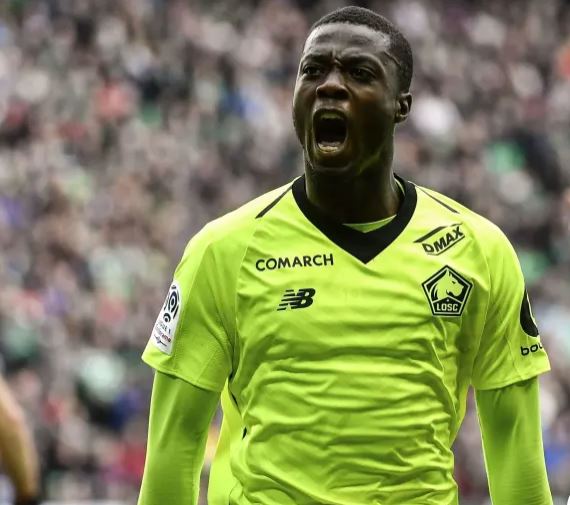 Nicolas Pepe
Arsenal coach Unai Emery says the proposed deal for Lille forward Nicolas Pepe has not yet been sealed, describing it as 'not closed'.
Lille president Gerard Lopez told RMC Sport on Wednesday that Pepe's move to Arsenal for £72.8 million (€80m/$88m) would soon be completed.
That fee would break Arsenal's transfer record but Emery is cautious over the Ivory Coast international's future, although he suggested Pepe may not be the last new arrival.
"He played here in Angers a few years ago, and then in Lille. He has progressed as a player," Emery told reporters after a pre-season friendly against the Ligue 1 side.
"We are speaking about a lot of players, we want to select on players who can really help us, give us big performances and improve our squad. We have different options. This one at the moment is not closed, but he is one we are following.
"We are working on the possibilities to sign players. We signed [Dani] Ceballos, and we have a possibility with Pepe. We are looking for the possibility to improve, but only if we can take more steps in the squad.
"Our target is to sign another player if he can really, really improve us. Our target is continuing to sign another player if we can."
Emery added talks are ongoing with Laurent Koscielny over the defender's future at the club after he refused to travel with the squad on pre-season amid links with a return to Ligue 1.
"He's a very important player for us. We are speaking with him and with the team, about my responsibilities, the club's responsibility and his responsibility," the Arsenal boss said.
"With respect it's better for us, it's better for the team, and it's changing our idea with the centre-back, because if he is here with us this season, it's very different than if he isn't with us. At the moment it's a very personal decision, and we are respecting that.
"I am speaking with him and we are going to find the best solution, but overall we need a player like him. We want to be strong in our defensive line, working with the players we have now."
Emery's side beat Angers 4-3 on penalties after a 1-1 draw at the Stade Raymond-Kopa.
It was an experimental squad named by Emery, but Arsenal are now without a win in their past three pre-season friendlies ahead of facing Barcelona in the Joan Gamper Trophy on Sunday.
"We are going to play the first match away against Newcastle, and tonight was a similar performance against that sort of opposition Angers, and also they were giving everything in their performance against us for their supporters," Emery added.
"There were two very different halves. The first half they started harder than us and they scored. We didn't control the game like we wanted. In the second half we became better to control the game, with the ball and having more chances to score.
"I think from the second half we deserved a better result. But the most important thing today was to work well physically and with different players. Also today the young players took some minutes, knowing we needed a performance against a difficult team here away."
Top Stories