Erelu Fayemi, who was moved to tears upon hearing about the woman’s poor condition, visited her on Tuesday at her home. 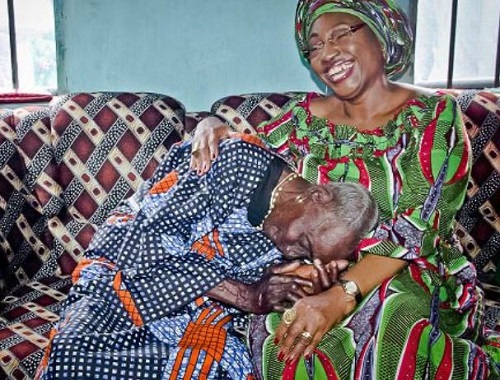 The aged woman was found in a ramshackle building during the verification exercise for the Food Outreach Programme for the elderly, known as “Ounje Arugbo”.

The project is coordinated by the Ekiti Development Foundation (EDF) run by the office of the First Lady.

Mama Osho was not able to make it to the meeting point for the exercise and the team took the exercise to her doorstep.

There, they discovered the 110 year-old woman’s lonely and pitiable living condition. The frail-looking woman was said to have lost her three children many years ago and had no one to take care of her.

Erelu Fayemi, who was moved to tears upon hearing about the woman’s poor condition, visited her on Tuesday at her home.

In addition to changing her accommodation and making arrangement for her daily feeding and upkeep, the governor’s wife also assigned two nannies to take care of the woman.

Erelu Fayemi said: “It is very important for us to remember that we have elderly people in our communities who are vulnerable because they either do not have children or their children are far away and  had forgotten them or not able to look after them.

“During John Kayode Fayemi (JKF)’s first tenure, we had the social security programme for old people, which meant we were able to improve their lifespan. But over the past four years, the social security scheme was jettisoned and many of them became indigent.

“In September, we are restarting the social security scheme. I thought l should supplement it with a programme called “Ounje Arugbo”, that is providing food supplement for the elderly.

The visibly joyous Madam Osho was lost for words as she embrace the governor’s wife.

The Chairman, Ikere Local Government, Pastor Kayode Olubode, thanked the governor’s wife for her unrelenting effort and support for the people.