Two fraudsters who have been scamming innocent people on Facebook have been apprehended by security operatives. 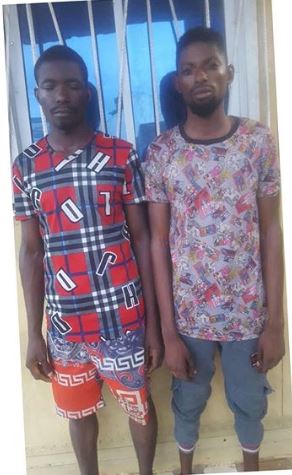 The suspects
The Nigeria Police have arrested two suspected fraudsters who impersonated officials of the Nigeria Customs Service auctioneers on Facebook and other social media sites.
The police also warned members of the public to be wary of fraudsters who pretend to be officials from the Customs auction Department or agent, as they use it to swindle unsuspecting victims.
Already, Saturday and Amos had defrauded a businessman, Adeniyi Adegboyega, of  N4.3million in a phony car auctioning deal, before they were arrested in Ewan, Edo State.
Adegboyega, a Lagos based businessman, said he met them on Facebook and they made him believe that they were genuine custom officials on auction exercise but ended up defrauding him of his hard-earned money.
Top Stories