A Nigerian university graduate has been stabbed to death some days after he passed out from NYSC.

Alenin Joseph
The heartbreaking story has been told of Alenin Joseph, an Ambrose Alli University Ekpoma graduate who was stabbed to death by phone snatchers after his NYSC.
Alenin was killed on his way home after arriving Warri from Calabar, where he underwent the mandatory one year national youth service.

Joseph passed out of NYSC on July 25th in Calabar, the Cross River State capital and took to Facebook to celebrate the occassion.

He wrote: "Humongous thanks I must give to the inscrutable, ineffable, incomprehensible, great controller of the universe, for his divine providence through out my one year of servive...
"I have never been a staunch proponent of the (NYSC) scheme but I have to undertake it fue to societal demand. I earnestly pray and hope to be in a position for tomorrow reformation," his post partly reads. 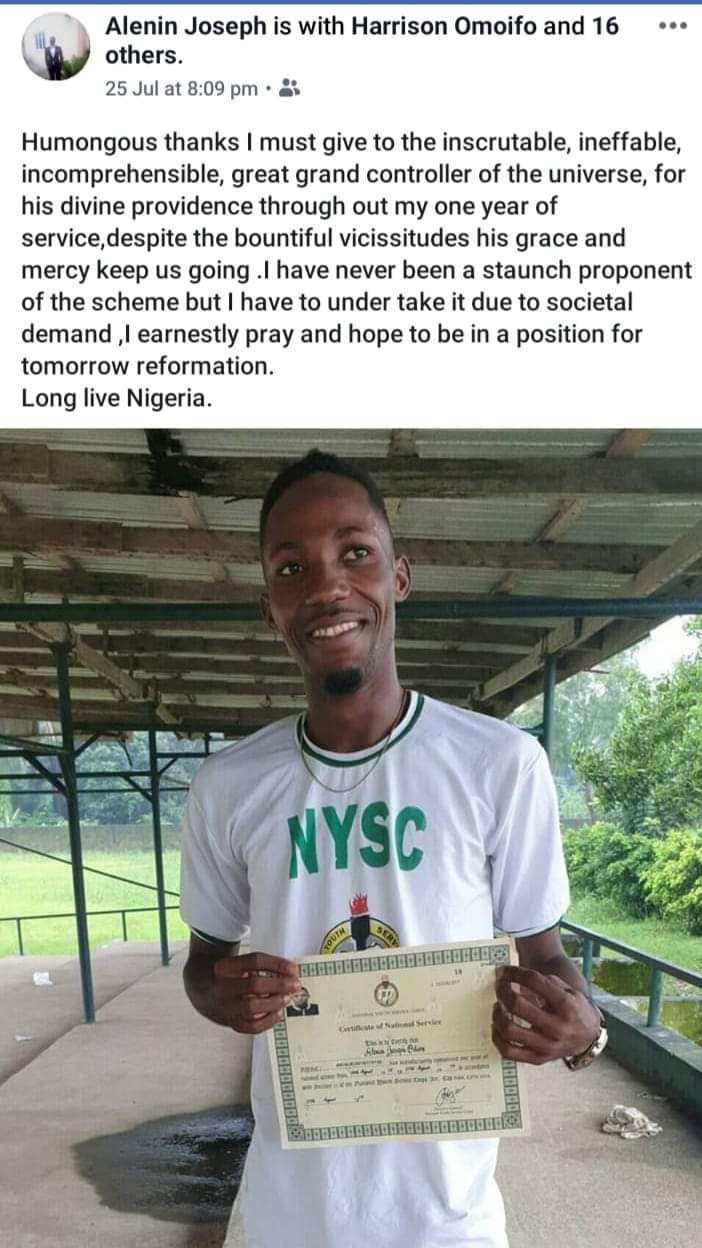 On Saturday, July 27, Joseph packed his bags, boarded a vehicle to his hometown Warri, Delta State. He arrived very late to the city and was heading home when a group of boys accosted him and demanded for his phone. He recognised one of the assailants identified simply as Buchi (Mama Onome's son) so they stabbed him to death.

According to friends and video posted on Facebook, the suspects were nabbed on Sunday, July 28, after they tried to rob another victim.

Friends and family have taken to social media to mourn his painful death and demand justice..

One wrote: "I'm struggling to find the right words to describe how I feel..
Pacific Joe as your were called by many... Was a Bright Student in Economics department .. Quiet but Jovial..
Struggled for 4years to earn a degree, did Menial jobs just to push on..
Finally Graduated, served his father land and passed out just 25th here.. All of a Sudden it's RIP Joseph Alenin?
Haaaaaa!!!..Joe, this one pain me..
May God Accept your Soul... RIP my Man"
Top Stories