More Trouble For Shi'ite Leader, El-Zakzaky As His Own Elder Brother Declares Him A Terrorist


The elder brother of the detained Shi'ite leader, El-Zakzaky has declared the man a terrorist. 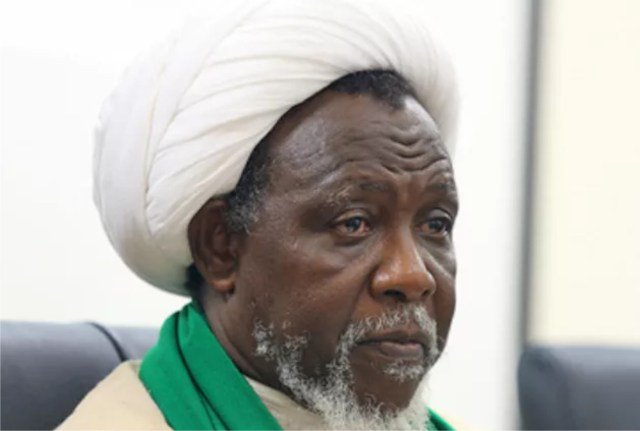 El-Zakzaky
According to a report by The Nation, the elder brother of Sheikh Ibraheem Yakubu El-Zakzaky, the leader of Islamic Movement in Nigeria (IMN), otherwise known as Shi’ites, Sheikh Muhammad Sani Yakoob, has reacted to the recent proscription of IMN, saying that, it was long overdue.

El-Zakzaky’s elder brother, who is also the Zaria Branch Chairman of Izalatul Bid’ia wa Ikamatus sunna, told our correspondent in an exclusive interview in Zaria, Kaduna State that the federal government should not stop at proscribing IMN but go further to disband the Shi’ite sect in its entirety.

He said the decision taken by the federal government to proscribe the IMN was not only right but overdue because the government can be overthrown through the violent protests of the group.

Sheikh Yakoob said the IMN leader is responsible for whatever calamity has befallen him, saying that he was warned when he started propagating “his dangerous Shi’ite doctrine.”

He said: “As you may be aware, El-Zakzaky is my blood brother. We were given birth to by the same father. While growing up, before he started this journey into Shi’ism, I didn’t have any close friend apart from him. We did everything together. We studied together in Islamic school.

“We warned him seriously to desist when he started this Shi’ism ideology. I personally warned him several times, and when he refused, I had to abandon him. So, whatever the authorities might have done to him, he caused it for himself.”

Sheikh Yakoob added: “There is nothing good about Shi’ism. These people are supposed to have been proscribed a long time ago, but the government waited until they are now causing havoc.

“In the entire world, where has the Chief of Army Staff ever been blocked on the way and denied right of passage? Since the time Shi’ites people did that to the Nigerian Chief of Army Staff, they were supposed to have been stopped. But now, the authorities seem to have understood their mission.

On Tuesday’s declaration by another Shi’ites group that IMN members are fake Shi’ites, El-Zakzaky’s brother described the declaration as hypocritical, saying that all Shi’ites groups have the same doctrine and ideology.

“They are liars. All Shi’ites are one,” he said.

“What they are doing is hypocrisy. All of them have the same doctrine and ideology. They are only in Shi’ites leadership tussle with Zakzaky. That is why they are denouncing him publicly.

“Therefore, it is not only Zakzaky’s group that is supposed to be proscribed. The government should outlaw the entire Shi’ites sect. This is because both Boko Haram and Shi’ites share the same ideology.

“They can continue to fool other people that they are not armed, but we know they carry arms. Didn’t you see them shown with their arms?

“They lied that they were not the ones that killed the police officer in Abuja. The Deputy Commissioner of Police that was killed in Abuja was not the first police officer to be killed by the Shi’ites.”

When asked about the court order that, said his brother should be released and a house built for him anywhere in northern Nigeria, Sheikh Yakubu said, government should only obey such order if it is also ready to build a house for the leader of the dreaded Boko Haram group, Abubakar Shekau.

He noted that since the exit of El-Zakzaky, Zaria, which was his base, has been very peaceful as security agents have been able to tame their “violent activities.”
But in spite an order proscribing it, top members of IMN yesterday aligned with the decision made by the daughter of their detained leader, Ibraheem El-Zakzaky that the group’s protests will continue until her parents are released.

The group also disowned the statement issued on Wednesday by its spokesman, Ibrahim Musa, that they had suspended the protests in line with the proscription of the sect by the Federal Government through a court order.

Suhaila Zakzaky in videos shared on her Facebook page on Thursday questioned the ban and said the protests would continue until her father is released.

A statement issued by a top member of the IMN, Abdullahi Musa, for Academic Forum, Sisters’ Forum and Abul-Fadl, said other IMN members were not informed about the ban on protests.

Musa said: “On the 31st day of July, 2019, a press statement titled “We Are Temporarily Suspending Our Street Protests” and signed by Malam Ibrahim Musa, President of the Media Forum of the Islamic Movement in Nigeria, went viral.

“The article was published and aired by numerous media outlets, both local and international.

“In the statement, it was written that “this was mainly to create openings into the resolution of problems, especially the court case instituted by our lawyers on the proscription order by the federal government this week.”

It further claimed that “if at all any protests occurred anywhere in the country, it might be this notice hasn’t reached those in the field or this message is misunderstood or it is some security agents who are behind it.

“First of all, we would like to state for the record that apart from members of the media forum, none of us was informed of this prior to seeing it in the papers and online.

“Secondly, the media forum of the Islamic Movement is supposed to consist of Press men and thus has no involvement in the organising of our ceremonies, our protests or legal activities among others.

“Thirdly, no decision of the Islamic Movement in Nigeria has ever been communicated on the pages of a newspaper.

“Contrary to what the statement may insinuate, it is important to note that the proscription order was not an act of the Federal Republic of Nigeria, but rather from some Federal High Court in the capital Abuja.

“Bear in mind that courts do not make laws; the National Assembly does, and there is a process involved.

“Under the constitution, even the President lacks the legal authority to simply pronounce edicts into law. Nigeria is not an absolute monarchy.

“Most pre-eminently, the right to protest peacefully is enshrined in the Nigerian constitution. Impunity is not.”

The IMN disowned Ibrahim Musa as their spokesman, saying: “In the aftermath of the publication of this unfortunately misleading statement, we subsequently tried to investigate the source of this frankly confusing document.

“We have consulted extensively with fellow followers of Sheikh Ibraheem Zakzaky on this matter.

“Our only conclusion is that this whole affair was a combination of misinformation, miscommunication, human error and other significant factors.

“Here in Abuja, we are legally protesting the illegal detention of our leader and his wife.

“By doing this for our leader, we are also legally protesting against all forms of illegal detention, extrajudicial killings, among numerous other illegal perpetrations of injustice by this current administration.

“The statement signed by Malam Ibrahim Musa of the media forum does not, in any way, reflect the beliefs and convictions of the Islamic Movement in Nigeria.

“A single representative of a Forum within the Islamic Movement has no authority to single-handedly dictate his opinion on every one of us. Only our leader Sheikh Zakzaky may do that.

“For this reason, we are compelled to caution the media to never treat, any further, such explicit declarations by any member of the Islamic Movement in Nigeria in general, and Ibrahim Musa in particular, without a grain of salt.

“We wish to also explicitly state that we are fully determined to continue our protests.

“We shall continue our peaceful protests uninterrupted and unhindered till our leader Sheikh Zakzaky is free, for as long as it takes, regardless of obstacles.

“Until Sheikh Ibraheem Zakzaky is Free, our protests will continue.”
Top Stories