However, SP Sunday Ekwe, the officer in charge of Legal Department, Kano Command, on Monday tendered the documents on behalf of the Commissioner. 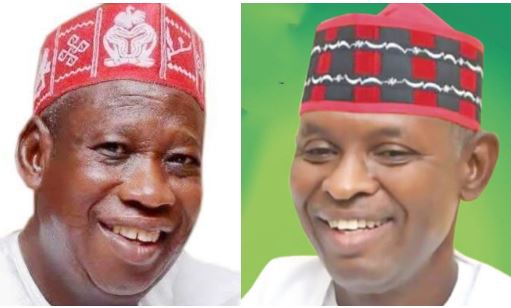 Governor Ganduje and Abba Yusuf
The Kano State Commissioner of Police, Mr Ahmed Iliyasu, on Monday, tendered 14 result sheets for Gama Ward results in Nasarawa Local Government Area of Kano, for the March 23 governorship election before the Kano Governorship Election Petition Tribunal.
DAILY POST reports that the PDP gubernatorial candidate, Abba Yusuf and his party are challenging the declaration of Dr Abdullahi Ganduje, of the All Progressives Congress (APC) as the winner of the March 23 election.
Recall that on July 31, the tribunal ordered the Kano State Commissioner of Police, to tender the March 23 governorship election documents demanded by the petitioners.
However, SP Sunday Ekwe, the officer in charge of Legal Department, Kano Command, on Monday tendered the documents on behalf of the Commissioner.
NAN reports that he tendered item number III, for Suntelma Primary School polling unit code 74 form EC8A/0005032, No 15 code 226 form EC8A/0005020, No 28 code 046 form EC8A/0005039, No 29 code 040 forms EC8A/0005030 and Item number 33 code 030 form EC8A/0005231 among others.
Counsel to Ganduje and Independent National Electoral Commission(INEC), Mr Offiong Offiong, SAN, and Mr Adedayo Adedeji, objected to the tendering of the documents before the tribunal.
Counsel to the petitioners, Adegboyega Awomolo, SAN , presented the 32 witnesses to testify before the tribunal.
The witness Suleiman Nasa a returning agent fo the PDP in his deposition before the tribunal said on March 9 during the governorship election he voted at his PU 001 Filing Mai Nasara Ward.
Nasa said there were 88 polling stations in Gama.
NAN also reports that the petitioners have so far presented 32 witnesses.
Justice Halima Shamaki, accepted the documents and adjourned until Aug. 6, for continuation of hearing.
Top Stories