Female Lawmaker Kicked Out Of Chambers For Bringing Her Baby (Video)


Proceedings were temporarily brought to a standstill after Kwale Woman Representative Zuleika Hassan entered the chambers with her five-month-old baby. 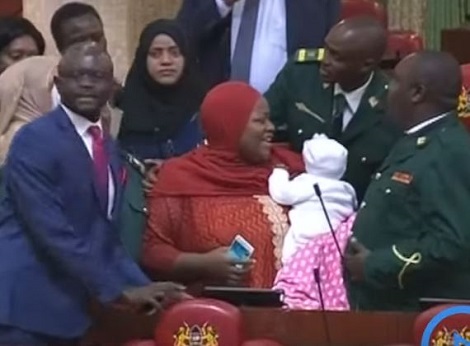 Zulekha Hassan addressing the media
A Kenyan lawmaker, Zulekha Hassan, was on Wednesday kicked out of parliament because she came with her baby.

Hassan, who represents the Kwale constituency had brought in the third baby she had while in the parliament because she had an emergency and was unable to sort out babysitting arrangements, reports Citizen Kenya.

Speaking with the Citizen Kenya, she said, she had expected to be in the August House (name of the parliament) for a short time.

She said, “Today, I had an emergency, what was I supposed to do? Miss parliament? That’s why I just came with her. I knew I would be staying here just for a while and later when my situation is better, I would go. But if there was a room or a creche or nursery, I would then be able to put my baby there.”

According to the Standing Orders of the National Assembly, strangers are not allowed into the House, including children.

Even the Head of State accesses the chamber on special occasions provided for in the Constitution, whereas members of the public can only access the Speaker’s gallery, but with permission.

After she was sent out of the parliament with her baby, Hassan revealed that there had been a rule that a nursery should be established within the premises of the parliament for nursing mothers since 2013 but it was never implemented.