Three police officers have died a painful death after being shot dead by soldiers in Taraba state. 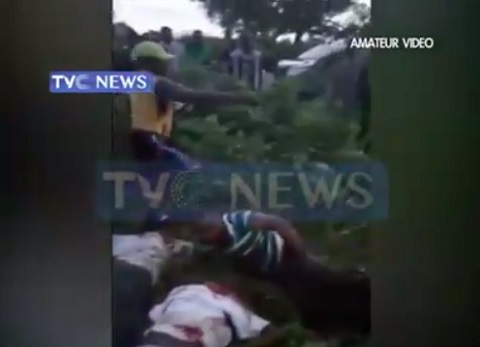 The dead police officers
The Inspector-General of Police, IGP M.A Adamu, NPM,mni has ordered full-scale investigation into the circumstances surrounding the death of three (3) Police operatives and one (1) Civilian, and serious injury to other Police operatives, who were on investigation activities to Ibi, Taraba State, to arrest one Alhaji Hamisu indicted in a series of high-profile kidnap incidents in the State.
The Police Operatives, led by ASP Felix Adolije of the Intelligence Response Team (IRT) reportedly came under sudden attack and serious shooting by soldiers of the Nigerian Army, along Ibi – Jalingo Road, Taraba State.
The Operatives, who were taking the arrested suspect, Alhaji Hamisu to the Command Headquarters in Jalingo, were shot at severally by the soldiers despite sufficient proof that they are Police personnel on legitimate duty.
Three Policemen (comprising one Inspector and two Sergeants) and one civilian died as a result of gunshot injuries sustained in the attack while others sustained serious gunshot wounds.
The soldiers thereafter released the handcuffed suspect, Alhaji Hamisu, who is now on the run. Alhaji Hamisu, a notorious kidnap kingpin, has been on the Police wanted list for his complicity in several high-profile kidnap cases including the recent abduction of an Oil-Mogul in Taraba State wherein a ransom of about One Hundred Million Naira (N100,000,000) was paid.
The IGP has ordered the AIG Medicals to proceed to Jalingo to ensure concerted efforts in the treatment of the injured Police officers. The remains of the deceased have been deposited in the morgue.
Meanwhile, the Force has commenced a full investigation into the bizarre and unfortunate incident.
Watch video below:
Top Stories