Oduola said while he was explaining what happened to the owner of the building, he was also inflicted with machete cuts to his head by one of the ratings. 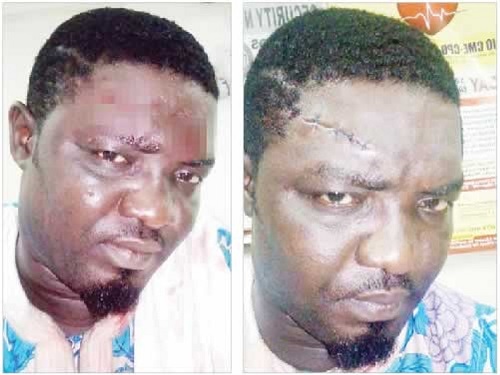 Abiola Oduola
A journalist, Abiola Oduola, has accused some naval ratings of assaulting him and his colleague, Segun Ojo, in the Mende, Maryland area of Lagos.

It was gathered that Oduola had parked his car in front of a building close to the Spa Lavender, the venue of an events he and his colleague were to cover on July 21, 2019.

By the time they returned at the end of the event, the tyres of the vehicle had been deflated by the naval ratings.

The ratings allegedly tortured Ojo till he passed out for requesting to speak with the owner of the building.

Oduola said while he was explaining what happened to the owner of the building, he was also inflicted with machete cuts to his head by one of the ratings.

He stated, “On July 21, we were on duty to cover the one-year anniversary of the Don Sylvester Records at the Spa Lavender on Okunola Aina Street, Mende, Maryland. We parked in front of a building, which did not have the no parking sign, and the vehicle did not cause any obstruction. A man approached us and said we should not park there, but we politely asked him if there was any other place we could park. He said I should go and park anywhere I liked.

“My colleague was standing by a small gate. The rating, who used the machete on me, walked up to him and dragged him inside, locked the gate and started beating him, while I was by the bigger gate outside screaming for help. Another rating came out through the big gate and dragged me inside too and started punching my face.

“The owner of the house arrived with his driver and parked in front of the house and was shouting at us. I guess the ratings had alerted him earlier and accused us falsely. We later learnt that he was a retired rear admiral. I tried to explain what happened to him, but the rating used the machete he had with him to cut me on my forehead.

“When the house owner saw blood gushing out from my forehead, he pushed the rating inside the house and instructed him not to come out again. We were pushed to the other side of the road before good Samaritans helped to order an Uber ride that took us to the St. Nicholas Hospital in Mende.”

The Oyo State indigene said after first aid treatment was administered to them at the St. Nicholas Hospital, he went to the Anthony Police Division to report before heading for the General Hospital, Gbagada.

He added that the ratings had been trying to turn the case against him after he reported to the police.

Oduola stated, “The next day, I was summoned by the IPO in charge of the case that the rating, who assaulted me, was around with one Lt. Solomon, who was said to be the CSO to the retired rear admiral. We both narrated our sides of the story and the rating claimed that I attacked him with a stone. The DPO asked that we should resolve the matter amicably.

“I agreed and Lt. Solomon promised to raise the sum of N10,000 to compensate us, which we considered to be a ridiculous amount in view of the expenses we had incurred and are still incurring. Lt. Solomon suggested that we meet with the retired officer and since my car was still parked in the front of his building with the tyres deflated, I obliged.

“A vulcaniser was fixing my tyres when the retired officer arrived and he started hurling insults at me. He claimed that he had no money to give us and said his building was a military zone. The Lt. Solomon sent me a text message later claiming that the rating, who assaulted me, had been admitted to one hospital.

“He asked the police to produce us for interrogation at the naval base and to get copies of the statements made by us at the station, but the IPO refused. They are now hunting my colleague and I, making us appear as the aggressors.”

When the state Police Public Relations Officer, Bala Elkana, was contacted, he said the matter had been referred to the naval authority.

Elkana stated, “The matter was investigated; the injured journalist was treated and at the end of the day, there was an informal resolution between the journalists and the ratings. If Oduola feels threatened, or is not satisfied with the resolution, he should go back to the police station, where he reported the matter, and continue with the case.