The Super Eagles return to action in September with a high-profile friendly against Andriy Shevchenko's men. 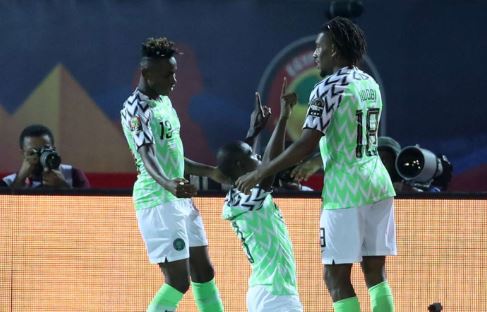 File Photo
Nigeria Football Federation (NFF) has announced the Super Eagles will face Ukraine in an international friendly on September 10.
The three-time African champions finished third at the 2019 Africa Cup of Nations staged in Egypt thanks to their 1-0 win over Tunisia.
In a series of tweets by NFF president Amaju Pinnick, he noted the game is part of his administration’s initiative to expose more players to international football.
“We have secured a Grade A international friendly match for the Super Eagles against the Ukraine in Kiev, on the 10th of September,” Pinnick tweeted.
“It is part of our on-going drive to expose as many players as we can to global football, so this should be another springboard for our young stars.”
Nigeria moved up to 33rd place in July’s Fifa rankings having climbed 12 places from their 45th position in June, accruing 1481 points.
Gernot Rohr’s men begin their quest to qualify for the 2021 Afcon when they face Benin Republic on November 11 in a Group L fixture.
Top Stories