Some traditional worshipers have caused commotion after they dared to sack a mosque in a community in Ogun state. 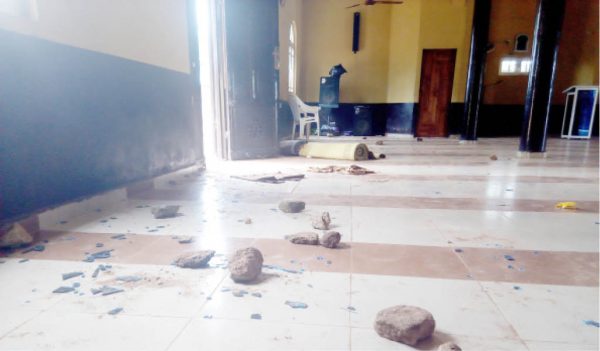 Residents of Idi-Iroko, a border town between Nigeria and Benin Republic, located in Ipokia Local Government Area of Ogun State, have held on to their tradition despite modernisation.

The town is also known as a gateway for smuggling. Top among the smuggled goods are rice, cars, petrol, poultry products, vegetable oil, secondhand clothing.

The indigenous people of the town are said to be the Yoruba, Anago and Egun, while languages spoken by residents include Yoruba, English and French due to its proximity to the neighbouring Benin Republic.
Last week, the community was in the news over an alleged attack on a mosque by some traditional worshippers.

“It was gathered that the attackers got angry because Muslims called people to prayers in flagrant disregard to the warning not to do so when the Orisa Oba ritual was being performed.

Our correspondent learnt that Orisa Oba has always been observed in the town from time immemorial. While the traditional rites are in progress, everybody is expected to stay indoors for two or three days.

According to adherents, during this period, Orisa Oba’s spirit is invoked, based on necessity, to cleanse the town in the wake of calamities. It forbids noise, music and light, whether during the day or at night.

Our correspondent gathered that residents are usually warned to abide by these restrictions each time the ritual is being observed. The last ritual took place more than 10 years ago, an insider said.

It was gathered that this is not the first time a mosque would be attacked over a similar issue. Residents said a mosque along Aferiku Road had ceased to exist following such an attack in the past.

“There were seven of us observing the prayer. Three of us were adults while others were young boys. Suddenly, we heard some people throwing stones at the window. Initially, we thought it was a violent wind, but when a stone almost broke the head of the person leading the prayer, we knew there was trouble. Within a blink of an eye, the generating set went off.

“Some of us immediately stopped the prayer and another person summoned courage, stepped out and discovered that the hoodlums were already taking away the generator. He chased them and retrieved the generating set. We were all taken by surprise, but we dared not retaliate because they were many,” Oke narrated.

Also speaking with Daily Trust on Sunday, the Imam in charge of the mosque, Abdulazeez Omoakin, described the action as unfortunate.

“Before the day we were attacked, we heard that nobody must go to mosque and whoever wished to pray must do so in his house. But we are law abiding people and we all know it’s only the government that can restrict movement. And we know the law allows us to practise our religion,’’ Omoakin said. 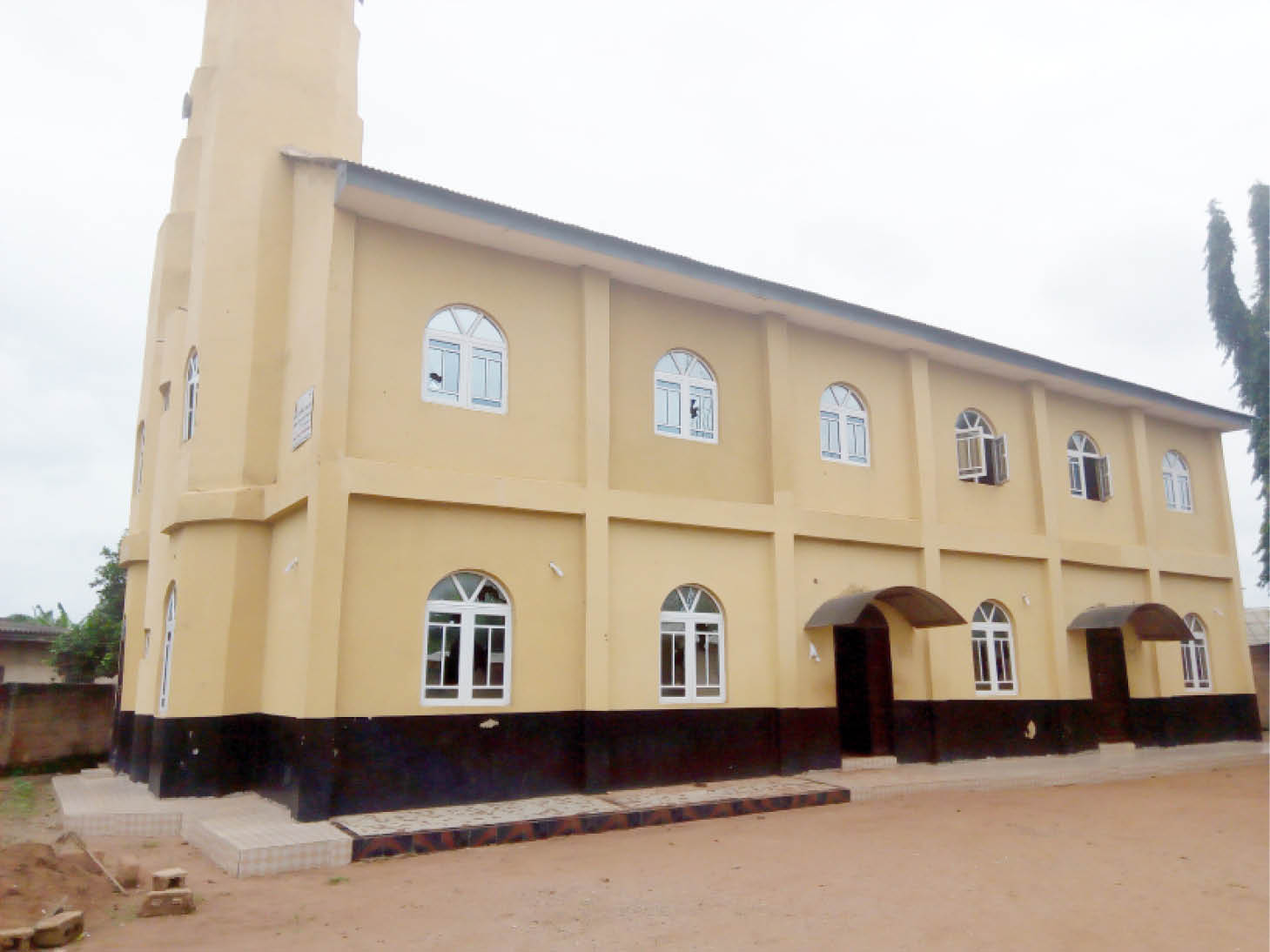 Windows were smashed by the attackers PHOTOS: Peter Moses
According to him, few minutes after the attackers left, one Ajani Balogun led some people to the mosque, threatening to pull it down if they called to prayers again.

Imam Omoakin said it took concerted efforts to calm his people in the face of the provocation. “Are they saying we don’t have a right to practise our religion?  He asked.

“It’s only our mosque that was attacked, but we were not the only mosque that called people for prayers that day. They called people for prayers at Araromi and some other places in Idi-Iroko. I was informed that they even called Muslims for prayers at Customs barracks. But I am sure they dared not go to the barracks to attack them,” he said.
Omoakin vowed that they would not be cowed to abdicate their rights to religion and movement, saying its only government that has the power to restrict movement.

He demanded that the mosque be renovated while government must put measures in place to curb activities of traditional worshippers,  who observe their rites during the day at the expense of religious and economic activities of the town.

He further said, “Those arrested must be made to sign an undertaking. We now live in fear of their threats. They said we must relocate our mosque.’’

Apart from the mosque, it was alleged that the traditional worshippers vandalised some vehicles at the Holy Trinity Catholic Church, also at Idi-Iroko.

The seminarian, however, said, “As a Catholic Church we have our doctrine. And whatever happened, we prefer to let it go. The church would not make it a press issue,” the Seminarian said.

Getting the traditional worshippers to say their side of the story posed a greater challenge as many of those approached feigned ignorance. It was gathered that due to the manhunt for the alleged attackers, a number of traditional worshipers had fled the town.

When our correspondent visited the palace of the traditional ruler, two chiefs on ground informed him that the monarch, Oba Olakunle John Ojo was out of the country. They turned down moves to get their comments on the development as they vehemently denied knowledge of the incident.

“My son, I don’t know anything about what you are saying. I heard about it, but as a matter of fact, you just gave me more information about the incident. It would have been better if Kabiyesi is around as it’s only him that can speak on the matter,” one of the chiefs said as he made his way out of the palace.

Outside the palace, however, a traditional chief in the town, who sought anonymity, told our correspondent that what led to the attack was the refusal of Muslim brothers to “give Caesar what is Caesar’s.’’

He said it’s an open secret in the town that each time Orisa Oba ritual is carried out, music and noise, including calling for prayers are forbidden. He said that Orisa Oba was last observed in 2004.

The traditional chief told Daily Trust on Sunday that it was the spirit of Orisa Oba that attacked the mosque, contrary to the belief that some adherents of the tradition invaded and attacked the worship centre.

“Going by the belief, Orisa Oba is not what you can see. And it can strike at anytime if the gods are not appeased. It’s a very dangerous god. If its warnings are not strictly adhered to, it can lead to calamities like building collapse, deaths and increased accidents.

“So it was Orisa Oba that attacked a mosque along Aferiku Road many years back. The gods struck at the mosque at night when they went against the warnings.

“In the same way, nobody can pinpoint those who attacked the mosque. It was the Orisa Oba that struck. They were just guessing. They have arrested some people allegedly linked to the attack, but they are innocent. Everything is spiritual. It was the god itself that struck,’’ the chief insisted.

He described the Imam in charge of the mosque and his congregation as “extremists who are hell-bent on changing the age-long tradition of the town.’’

“Most times, those affected are not natives of the town. They believe they can eradicate our tradition. That’s why I called them extremists. If they can play by the rules there would be peace. There has been peace in the community.

“Most importantly, they must know that it was their action that triggered the attack, so they have to appease the gods. They invoked the wrath of the gods. Also, all those arrested must be freed because they are innocent,” the traditional chief said.

When contacted, the police public relations officer in the state, Abimbola Oyeyemi, said that seven people had been arrested in connection with the incident, adding that they would be charged to court after investigation.’
***
Source: Daily Trust
Top Stories