The wife of a Winners Chapel Pastor who was killed by bandits has regained her freedom. 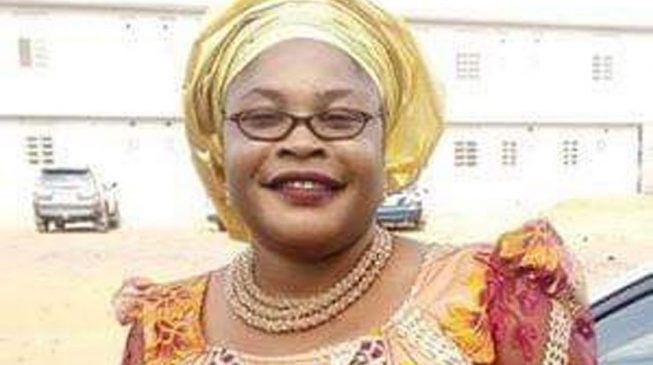 Mrs Omolewa
Oluwakemi Omolewa, widow of slain resident pastor of Living Faith Church, Kaduna, has been freed by her captors, according to a report by TheCabe on Friday.
Last Sunday, bandits attacked the Omolewas along Kaduna-Abuja road, killing Jeremiah, the husband of the abducted woman.
Joseph Hayab, Kaduna state chairman of the Christian Association of Nigeria (CAN), confirmed her release.
He said Oluwakemi, who is a deaconess in the church, was freed on Thursday night after a ransom was paid.
While lamenting the high rate of kidnappings in Kaduna, he said in the past four years, the church in the state has paid over N300 million as ransom to kidnappers while over 500 Christians have been abducted within the same period.
He said more than 20 churches, especially, those located in communities along Kaduna-Abuja road have been closed as people living in those area have since relocated owing to the activities of kidnappers.
“In the past four years, Christians in Kaduna state have suffered a lot. Generally, people in Kaduna state have suffered a lot in paying kidnappers ransom to ensure the release of either their family member or church member or neighbour or someone they know,’’ he said.
“It is sad to know that the church alone, from our statistics -ECWA Church, Baptist Church, Anglican Church, Catholic Church and many other Churches in Kaduna whose members have been kidnapped, have had to coughed out between N200,000 to N8 million to kidnappers to secure their release. In the last four years, the church in Kaduna has paid over N300 million to kidnappers.’’
He said the most embarrassing of such payment of ransoms is that of a pastor of Friendship Church Kudenda, a suburb of Kaduna which the kidnappers  insisted that the  N600,000 ransom they agreed to collect after negotiation, must be accompanied with cigarettes worth N10,000.
He said in Kachia, a reverend father was abducted and a ransom of N1.5 million was paid but that he has not been released since three months, “an indication that he might have been killed”.
“In many of our villages along Abuja road, people have abandoned their homes and relocated to places like  Buwaya, Gonin- Gora, Romi and other suburbs around Kaduna metropolis as a result of activities of kidnappers,’’ he said.
“These are farmers, they don’t have any work, they keep coming around looking for assistance from us to pay rent and buy food. They are really suffering because no effort is being made to tame or put kidnapping activities in Kaduna state in check.
“Sadly, when we raised alarmed that our people are being kidnapped, someone, instead of apologising to us and tell us that they have not done well, let’s work together to do well, they will go and sponsor some faceless young boys who are jobless and give them money to insult us.
“The recent alarm I raised about the killing of the late Omolewa and the abduction of his wife last Sunday, the next thing I saw (on Facebook), was a write up and a caricature of myself that I was speaking for PDP.  And I asked this question; are those Christians kidnapped, PDP members?
“Let’s not politicise issues that affect people’s lives. I don’t have PDP card, but even if I have, is that a crime in Nigeria?
‘’Even the APC in Kaduna state, when they wanted to be governor, they wrote me a letter seeking for my blessing and they know that we supported the governor to be elected during his first term. Should I be accused of being PDP member, just because I told them that something is wrong?

“That will not deter the church from speaking out the truth. If this money we have been paying to kidnappers were to be channelled, we would have helped government in solving some of the problems in the educational and health sectors by investing in those sectors.
“Sadly, today they are allowing evil people to impoverish us. What is politics in me telling you that my people are suffering and dying? What is politics in telling you that these kidnappers should be arrested?
“They are spending our money on our security but we are still suffering…They are now talking about blackmailing us, we will call the church to take action to stop this evil. We will not continue to have our people being abducted and killed. Our people cannot continue to live in fear, even in their homes.
“Three weeks ago, kidnappers went to Marraban Rido, broke into three houses and abducted three women.  I can go on and on to tell you incidences of people being frequently kidnapped and we keep on looking for money to pay the kidnappers…
“We don’t collect our offerings to give kidnappers, our offerings is supposed to be used for evangelism and catering for the needy. Now the money we are supposed to use for evangelism so that evil in the society would be reduced is being spent on paying ransom to kidnappers.
“It has come to a stage that we will not allow this to continue anymore because we have cried enough and no action is being taken and we are even being accused for crying out.
“There cannot be peace when there is no justice, the kind of peace I preach is not the peace of compromise, it is not the peace of lies, and it is not the peace of cheating. It is a peace where you must respect your neighbour, your neighbour respects you and the two of you respects each other…
“Even the United Nations that talks about peace will not allow evil to go around the world.  So blackmailing us will not stop us from crying that our people are being kidnapped and they are suffering and nothing is being done.
“Blackmail and character assassination, just to cover up for your inability to secure us, will not address the problem.”
Top Stories