The teenage mother accused a tailor of raping her in an uncompleted building and later forcing N50 in her hand to keep her quiet. 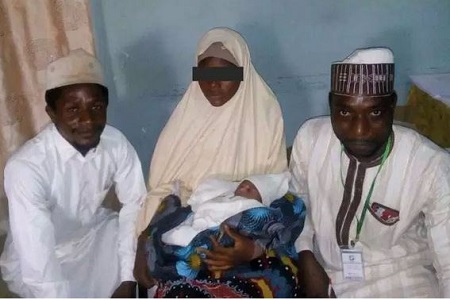 Rape victim (middle)
A 13 years old girl who was allegedly sexually assaulted by a tailor in Misau local government area of Bauchi State has been delivered of a baby girl at the Abubakar Tarawa Balewa University Teaching Hospital (ATBUTH) Bauchi.

The teenage mother had a “spontaneous delivery with no issues”, doctors confirmed to Vanguard.

Vanguard had reported that the teenage mother who hawked ‘pure’ water to support her family financially, accused a tailor, Malam Babayo of raping her in an uncompleted building and later forcing N50 in her hand to keep her quiet.

But following an investigative report by Vanguard highlighting the plights of the teenager and her family, a good Samaritan who was one-time governor of Adamawa State, Bala James Ngilari donated N100,000 to ease the financial burden on the family of the teenager.

Narrating to Vanguard, the Executive Director, Prison Inmates Development Initiative, (PIDI) Mbami Iliya said after the philanthropist read the investigative report by Vanguard on the rape allegation, he reached out to his Organization thorough the National Human Rights Council (NHRC) to help the teenager and her family.

According to him, “A former governor of Adamawa State, Bala James Ngilari contacted me after reading the girl’s story on Vanguard newspaper. He asked for the account number of the mother of the girl and sent them the sum of N100,000 to use for preparing for the arrival of the baby. And he’s just one person in a long list of people who have promised to help after reading your report.

“With the donations we got, we were able to buy and pay for everything she needs. We were even prepared for Caesarean Section, but thank God she didn’t have to go under the knife, she had a normal delivery.”

Speaking to Vanguard, the teenage mother who said she was in good health, expressed gratitude for the donations.

Her words: “I am grateful to everyone for coming to my aid when I was distressed. I thank you for the new clothes and many other things you got for me and my baby. May God reward you all. I feel better now.

When asked if the alleged perpetrator or his family members visited her in the hospital, she said ” Only one of the brothers of the man who raped me came here pleading that we should drop the case, and later gave my mother N2,000 as his contribution for my hospital bills. He didn’t come back again to check on me till now.”

When Vanguard contacted the Police to know the whereabouts of the suspect, the Public Relations Officer confirmed to Vanguard that the suspect was still at large but assured the search for the suspect is still on while adding that the Police will continue investigating the case until justice is done.

His words, “It is unfortunate that when the Police knew about the alleged rape, the suspect was already at large. But we are on the lookout for him, and we will continue investigating the case until justice is done.”

Vanguard reports that the teenage mother and her new baby have now been discharged from the hospital to rejoin her family.
Top Stories