The order followed a report on how the 29-year-old father of one died from the injuries he sustained from the torture. 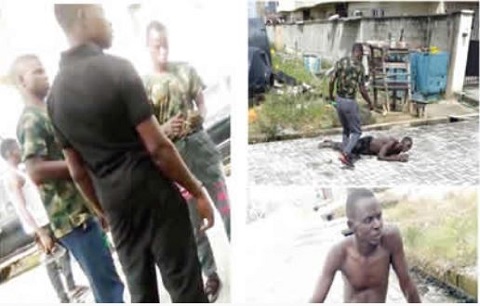 The victim being tortured by the Naval ratings

The Command Information Officer, Western Navy Command, Lagos, Commodore Tom Otuji, told our correspondent on Saturday that the Force had ordered the arrest of the two men.

The order followed Sunday PUNCH’s report on how the 29-year-old father of one died from the injuries he sustained from the torture.

Our correspondent had reported that one Seun, tenant at a house manned by Peter, had accused the deceased of stealing a piece of his jewellery.

The tenant invited the naval men and two other security guards to probe and beat Peter.

The Bauchi State indigene eventually led his tormentors to a man whom he sold the chain to and a sum of N100,000 was recovered from the buyer.

Afterwards, they descended heavily on Peter and the buyer during which the former passed out and was rushed to the Lagos Island General Hospital where he died some hours after.

In one of the photographs that captured the torture, Peter rolled on the floor as one of the officers raised his leg to kick him. In another picture, the buyer was forced into a mud inside drainage.

The police had arrested while Seun and the naval ratings are at large.