Dana Air passengers who wee left stranded by the airline after their flight was delayed and then cancelled, were provoked to an almost violent situation. 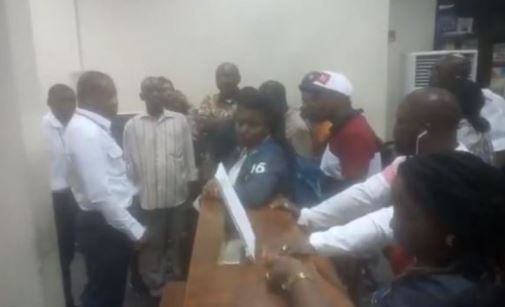 Passengers of Dana Air heading to Lagos from Uyo, Akwa Ibom state capital were stranded at the airport for 10 hours on Saturday.

The passengers, who had checked in at Akwa Ibom international airport around 11am for the mid-day flight, waited till 9pm after which the flight was cancelled.

This irked many of the passengers who complained bitterly that there was no plan by the airline to make arrangement for where they would spend the night.

When TheCable contacted Kingsley Ezenwa, Dana Air spokesman, he said the incident happened due to one of the company’s aircraft on maintenance.

He added that the company would look into the welfare of the stranded passengers, while they will also be compensated.

“We want to apologise to the passengers that are passing through this at the moment. It wasn’t actually intended,” he said.

“One of our aircraft had to go for unscheduled maintenance. For us, safety comes first. We are trying our best but we could not do anything about it. The flight has been rescheduled and we will definitely operate it. Concerning compensation and welfare, that will be communicated to the passengers.”

Watch the video of customers protesting below:
Top Stories