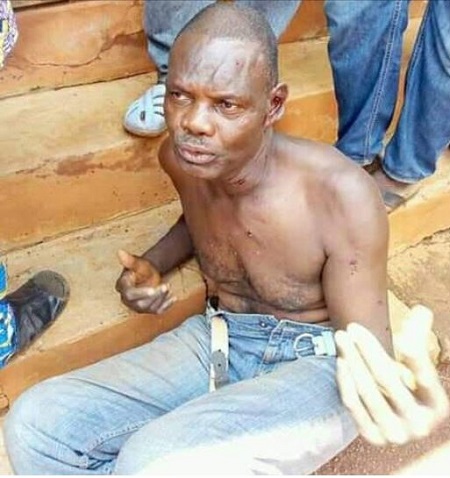 Daily Sun gathered that the minor was sent to buy Vitamin C tablets from the suspect who runs a patent medicine store within the same neighbourhood when he lured her into his room and abused her sexually.

But a relation who noticed that the minor was walking awkwardly soon after she returned from buying the medicine probed further by asking her questions and checking her private part.

“When the girl came home on Tuesday, we discovered she was walking funny. So, I took her inside my house and checked her after she revealed to me that Mr Ikechukwu popularly known as Ad’Egbo’ kissed and touched her mouth and private part with his penis.

“Immediately, I went to confront him (Mr Ikechukwu) but he denied. That was since Tuesday this week. His friend, Mr Acha is the reason why the issue had delayed till today. Mr Acha came to plead with me that he was going to talk to his friend, so that we will all go to the hospital and do the necessary medical checks and test but he has refused since then so, I decided to report the matter to the vigilante at Igbanonmaje yesterday Friday.” The source said.

Some neighbours also hinted our correspondent that the suspect had been in the habit of sleeping with minors for many years now stressing that nemesis had only caught up with him this time around.

One of the neighbours, Sunday Emmanuel who lives in the same environment around Bookshop road with the suspect and the victim came to tell the vigilante group that “this is one of the many cases of sexual assault by Mr Ikechukwu.

He recalled that in the year 2002, he fingered his grand daughter who was only three year-old then.

“I was so angry to the point that i engaged him in a physical combat then. But i told him that nemesis will catch up with him, now look at where his immorality has landed him.”

However, when the case was brought before the Vigilante, the head of the vigilante group, Major S. E. Ukwenya (Rtd), asked that the accused, Ikechukwu be handed over to the police for further investigations.

When contacted, Police Public Relations Officer (PPRO), DSP Catherine Anene who confirmed the report said the suspect was already in the custody of the Police in Otukpo.

Daily Sun observed that cases of rape of minors have been on the increase in the state. Only last week, a ten year old pregnant girl, Masengenen Torgba was delivered of a baby girl after she was allegedly raped by an 18 year old man, Terna Taga alias ‘Orkpaka’.
Top Stories