A man has gone rampage in broad daylight killing people with a knife and causing serious commotion in Sydney. 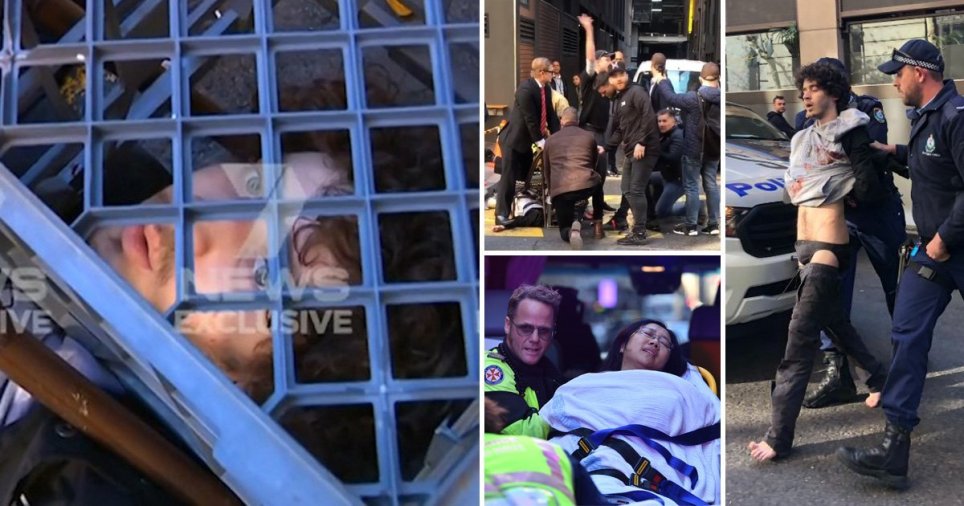 A man was taken into custody and people were ordered to avoid the area
A woman said to be a s*x worker was murdered and another was left with injuries after a man went on a knife rampage in Sydney.

The body of the s*x worker was discovered in a block of flats just yards from where the man emerged in the street covered in blood with a foot-long knife.

The alleged knifeman has been named as Mert Ney, 21, from the Marayong to the west of the city. His victim, a woman, 21, was found with her throat cut.
He is then believed to have gone into the street and started stabbing another woman, 41, in the back at a hotel in the city’s business district.

Soon after that he was chased through the streets by men in suits and firefighters armed with axes.

People nearby helped pin the man to the floor using a chair from a nearby cafe and a milk crate.
The attacker, who was covered in blood, allegedly shouted ‘allahu akbar’ – Arabic for God is great – and ‘shoot me’ during the incident but was swiftly taken into custody by police. 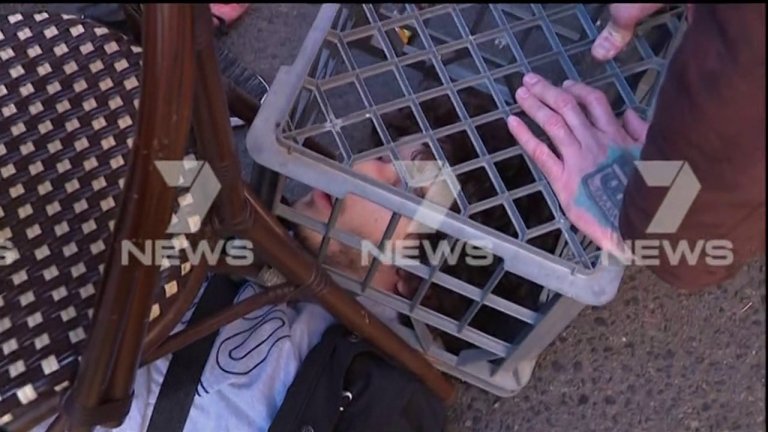 The man was pinned down by witnesses using a crate and a chair (Picture: 7 News)
People were urged to avoid the area around King and Clarence Streets at the heart of the central business district (CBD) while police were carrying out investigations.
The alleged attack took place at around 2pm local time, around 5am BST, near Wynard Station just as people were finishing their lunch breaks.

Marco, who was working at Batch Cafe, said he saw a man in his 20s and he had a blade that was about a foot long.

He said: ‘He was trying to smash a driver side window of a random car with the knife. He was unsuccessful.
‘People were chasing him by that stage. There was fireys [firefighters] chasing him with axes and he went around the corner.’

A witness from a nearby Subway said: ‘We saw the person with a knife over there bleeding.’

‘The cops are here and they blocked the road right now, so we can’t go outside. They said: “It’s a crime scene, you can’t come out”.’ 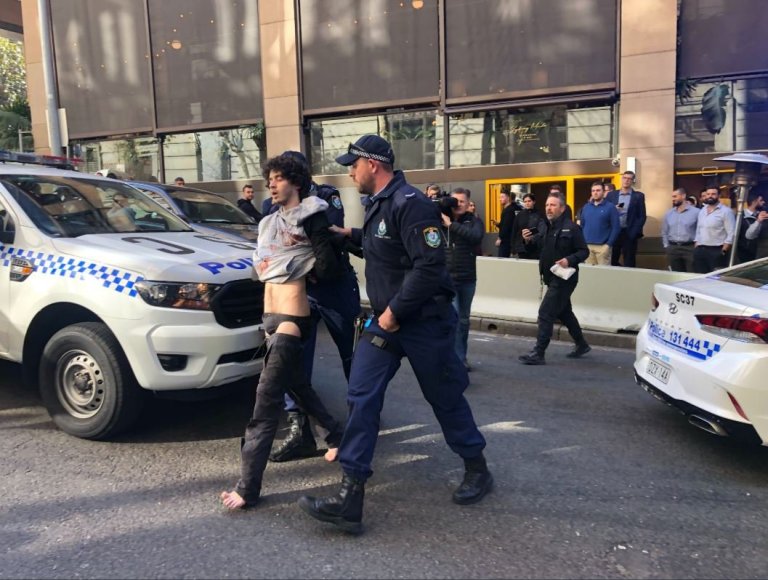 He was eventually taken away from the scene by police (Picture: Kartik Lad/Twitter)
He said he saw that traffic had stopped and people were running, telling Nine News Sydney: ‘All of a sudden this guy appeared with a knife in his hand covered in blood, down the front shirt, and next thing I thought OK well obviously I can’t go through all these cars.

‘As I’m thinking about doing something the guy jumps on the front of the car which was on the bonnet over here and then he goes up to the very top.’

He added: ‘I froze for probably a split second but then I thought I’m hoping that he’s not covered in any explosives or anything, so I quickly accelerated so he can get off the car.’

He said he drove left and then took a right turn where he could see the suspect again being chased by police and public.

‘He was fearless. He was completely fearless,’ he said, adding that he had ‘a big scary knife’ in his hand.

NSW Police Superintendent Gavin Wood, speaking to reporters near the scene, said: ‘A number of members of the public actually physically restrained the offender.

‘And I want to acknowledge those people, those members of the public who got involved. They are brave, and I can only use that word seriously.

‘They are significantly brave people. They approach the person… with clear evidence of a stabbing previously.

‘These people are heroes, and I want to acknowledge that.

‘These members of the public going about their day-to-day business have jumped into a situation which was extremely dangerous, extremely hostile, and they have brought a person – who we will be alleging stabbed an innocent person for no specific reason – into custody and allowed us to do our job.’

Mr Wood added: ‘The male offender responsible for the stabbing is in custody – all I can conclusively say is the male offender is on his own and no other person is complicit at this stage.

‘We are in the infancy stage of the stabbing investigation, there are a number of crime scenes, they are being thoroughly investigated.’

According to 7News a witness who chased him said: ‘Do you know how many people you just stabbed, you dog? You just stabbed a chick, mate, in broad daylight.’

The Sydney Morning Herald said several people had reportedly been stabbed, although there was no confirmation from officials.