A Nigerian soldier has reportedly assaulted his wife's tailor in a community in Edo state, causing some stir in the area. 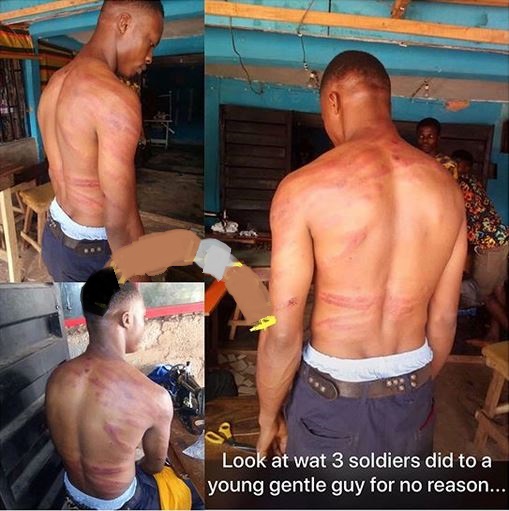 It has been reported that a tailor has been left with many marks on his body after he was seriously assaulted by five soldiers at S&T barracks road, Opp MFM church, Uselu, Benin, Edo State.

According to the victim, the wife of one of the soldiers had given him a clothe to sew but he couldn’t, because she didn’t make herself available for measurement.

The lady later sent her daughter to collect the clothe but the girl was rude to one of his apprentices and she eventually left without taking the clothe with her.

The client then sent her second daughter to pick it up but the tailor insisted that the rude daughter should come so that he could make her understand that her manner of approach was wrong.

That decision obviously didn’t sit well with their mom, who stormed the shop to assault the tailor. However, the tailor told her that he can’t do anything to her but would have retaliated if a man did that to him.

The matter was later reported to her husband who is a soldier and he mobilized his colleagues to the shop. The tailor was then whisked away to their barracks, where he was severely beaten up.
Top Stories