A Presidency source hinted that the activities of Obla has been under critical review for some time in the Presidency and his 'outright dismissal and prosecution is imminent'. 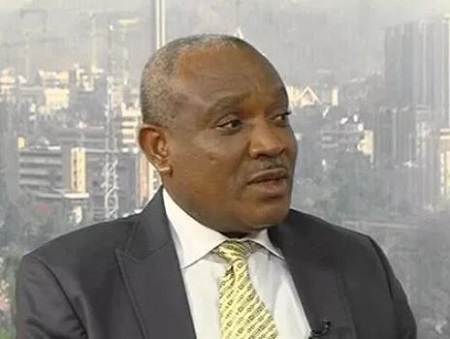 A competent Presidency source told journalists on condition of anonymity on Wednesday that Obono-Obla’s sack letter had been delivered to the Solicitor-General of the Federation and Permanent Secretary, Ministry of Justice, Dayo Apata.

The top government official said the Federal Government might ask the University of Jos to withdraw Obono-Obla’s Law degree while the Nigerian Law School might also be directed to bar him from practising as a lawyer.

These are apart from the criminal prosecution that he might be subjected to based on his alleged illegal financial dealings said to have been uncovered by the Independent Corrupt Practices and other related offences Commission.

“The letter conveying his sack was delivered to the Solicitor-General of the Federation and Permanent Secretary, Ministry of Justice, Obono-Obla’s supervising ministry.

“He may himself face criminal prosecution on matters related to his alleged financial dealings, as uncovered by the ICPC upon investigation.

“He may, in addition, face prosecution with regard to his academic credentials, specifically the WAEC certificate issue.

“Government may ask the University of Jos to withdraw his Law degree and the Nigerian Law School to debar him from practice.”

When contacted on the telephone, the Senior Special Assistant to the President on Media and Publicity, Garba Shehu, said he had not been briefed on the issue. 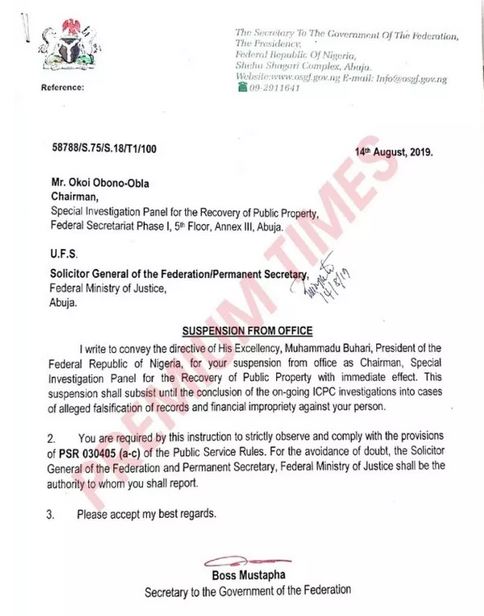 Shehu asked that enquiries be directed to the Secretary to the Government of the Federation, Boss Mustapha.

Also, attempts made to speak with Obono-Obla failed as of the time of filing this report on Wednesday evening as his telephone line indicated that it was switched off.

However, another Presidency source, who confirmed the development, told journalists that Obono-Obla’s activities and conduct had been under scrutiny in the Presidency for some time.

While on suspension, the Solicitor-General of the Federation, Dayo Apata, was said to have been asked to take over the leadership of the five-man panel in acting capacity.

The source said, “The Office of the Attorney General of the Federation and Justice Minister had earlier recommended to the Presidency that a thorough investigation be conducted into the allegations of forgery levelled against Obono-Obla while also suspending him from office.

“The Presidency has also received an indicting report on the panel chairman bordering on acts of forgery and misconduct.”

The government official said allegations levelled against Obono-Obla included abuse of office, intimidation, financial impropriety and falsification of records, among others.

He added that when he was confronted with the allegations, Obono-Obla begged and wrote an undertaking to turn a new leaf.

The source added, “According to the Office of the Attorney-General, Obla has been accused on various offences ranging from abuse of office, intimidation and unauthorised malicious investigations and administrative misconduct, among others.

“In fact, the matter of the madate of the panel became an issue of judicial interpretation at the Appeal Court in the case of Tijjani Musa V the Federal Governmrnt of Nigeria.

“In that case, the Appeal Court held that the panel headed by Obono-Obla lacks prosecutorial powers and cannot seize properties belonging to anyone or obtain forfeiture orders against any public official.”

He added that Obono-Obla’s problem got to the peak when the remaining four members of the panel wrote a petition against him.

The source said, “The other four members of the five-man panel wrote a petition against him, asking for urgent action to curtail the several identified unlawful conducts of the chairman of the panel.

“According to the panel members, while two cases involving NEXIM Bank and CBN, Finance Ministry, Nigeran Ports Authority were referred to the panel, the chairman single-handedly took on over 50 cases outside the mandate of the panel.”
Top Stories