In their June bout, Ruiz dropped Joshua four times before stopping him in the seventh round at Madison Square Garden in New York City. 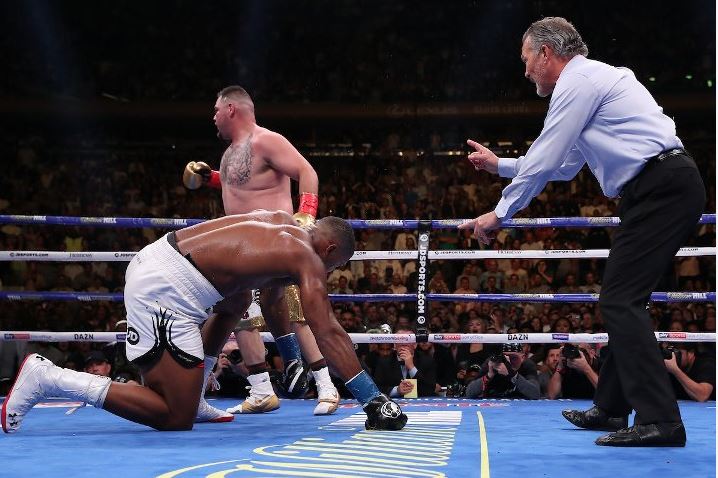 Anthony Joshua and Andy Ruiz
Veteran promoter Frank Warren is backing IBF, WBO, IBO, WBA heavyweight champion Andy Ruiz to once again topple Anthony Joshua in their expected rematch.
The second contest has been tabbed for December 7th, in Saudi Arabia - although Ruiz is disputing the location.
In their June bout, Ruiz dropped Joshua four times before stopping him in the seventh round ar Madison Square Garden in New York City.
But before Joshua went down, he dropped Ruiz very hard with a picture-perfect shot on the button. Ruiz showed off his solid chin and recovered very quickly, and then dropped Joshua twice in the same round.
“You can only look at what you see last time, and Ruiz took AJ’s best shot and got off the floor and took the fight to him,” Warren said, speaking on talkSPORT’s Sports Breakfast show.
“You saw that AJ couldn’t take what Ruiz did with him, he put it on him, he was on the floor two or three times and he never won a round of the fight after that knock down, not one round. And remember, this was a guy who took the fight on five or six weeks’ notice. This time around if he does fight, wherever it takes place, he will have at least 10 to 12 weeks in training camp.
“I’m not saying it’s going to make a lot of difference to his physical appearance, but certainly mentally he’ll be better prepared for it and he will be fitter. I don’t see much of a different outcome this time around. One million per cent. I thought Ruiz won every round in that fight.
“It wasn’t a fluke punch like Hasim Rahman and Lennox Lewis, and then in the rematch he turned up, didn’t get hit with a punch and knocked him out. He clearly lost the rounds. He was getting outboxed, he was getting outfought and then he got knocked down three times, two to boot. So I don’t see him really improving, not unless he comes out on his toes and tries to do a Tyson Fury and slip out the way, which he doesn’t have the body type or the boxing ability to do.”
Top Stories