A bandit has met his waterloo after he was killed by Fulani herdsmen in Zamfara state. 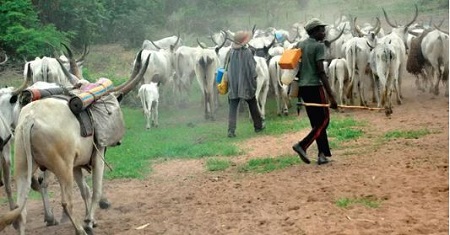 Herdsmen (File photo)
Fulani herdsmen on Sunday killed a bandit near Kango Village in Dansadau area of Maru Local Government Area of Zamfara State and brought his AK47 gun to the Government House, Gusau.
According to Punch, the Senior Special Assistant to Governor Bello Mutawalle, in charge of security, Alhaji Abubakar Dauran said, the deceased bandit was killed by the herdsmen when he blocked the road leading to Dansadau town in an attempt to rob people.
According to Dauran, immediately the information reached the herdsmen that a fellow Fulani brother was on the road, trying to rob passersby, they quickly mobilized to the spot where they engaged in a shooting spree and killed the bandit.
“They killed him instantly and brought his AK 47 to us here at the Government House, an indication that the peace process is really working”, said Dauran.
According to him, the murdered Fulani bandit might not be from the state, adding that, since the beginning of the peace initiative, there had never been any case of kidnapping or killing in the state.
Top Stories