Shocking! Police Officer Kills Himself With His Own Gun At His Duty Post


In what will come across as a really shocking development, a police officer has shot himself to death at his duty post. 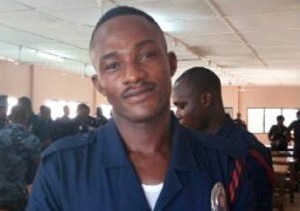 According to GhanaWeb, Alhassan had reported for duty at 5:45 pm at Dukes Petroleum Fuel station.

A colleague of his who visited the fuel station at that point in time said he found him seated in a plastic chair with severe wounds in the head, bloodstains on his body, the floor and with the service rifle between his thighs pointing towards his head.

He added that three empty gun shells were found lying on the floor beside him.

He said the District Commander, Sebastian Maya and the Divisional crime officer had been informed about the unfortunate incident.

He said, “The duty man Number. 46688 L/Cpl. Alhassan Asare was sitting in a plastic chair on the storey building dead with his rifle in between his thighs. The District Commander DSP/Mr. Sebastian Maya was duly informed and a follow-up visit was made to the scene.”

It is suspected that the deceased policeman may have shot himself for unexplained reasons.
Top Stories