It has been reported that the members of the Academic Staff Union of Universities at Ambrose Alli University have been attacked by students. 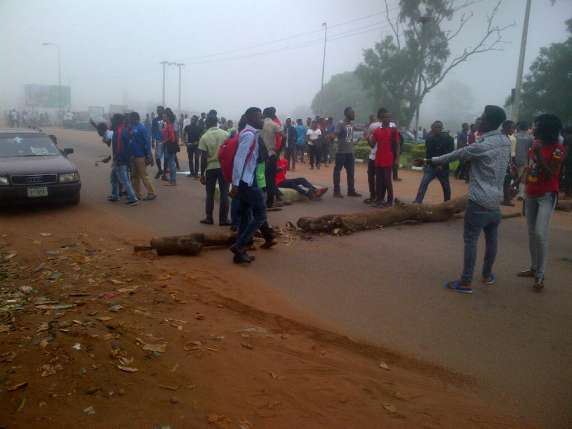 File photo
According to a report by Sun News, members of the Academic Staff Union of Universities, Ambrose Alli University, Ekpoma chapter, on Tuesday escaped death by the whiskers after students attacked venue of their meeting.

The rampaging students were said to have disrupted the meeting after news filtered to them that ASUU was holding the Congress to call for strike action at a time the non-academic staff workers are on warning strike.

Witnesses said the students threw stones, broken bottles and blocks into the venue of the meeting while chanting solidarity songs such as “We no go gree”, “No more meetings leading to strike”, “We are tired of staying at home due to strike action.”

Some lecturers sustained injuries and were rushed to a private clinic at Ekpoma town.

A student who pleaded anonymity said the disruption was to stop the lecturers from calling for a strike action.

The disruption made ASUU held another congress on Wednesday at another venue outside the school premises.

Speaking to the Nation on phone, Chairman of ASUU-AAU chapter, Prof. Monday Igbafen, said the students almost burnt them alive inside the hall.

Prof. Igbafen said they were discussing issues about the Vice Chancellor wife that took the Union to court when they were attacked.

According to him, “It was God that saved us. Security has collapsed inside the school. The VC cannot guarantee security.

“We are no crying to the government and the Council that our lives are in danger and lecture cannot hold in an unsecured environment.”
Spokesman for the institution, Mr. Edward Aihevba, said it was wrong for the leadership of ASUU to always paint the VC black whenever any situation arises.

Aihevba said it was students that violently disrupted the ASUU meetings

He said the school management has begun investigation into the incident and assured that anybody found liable would be brought to book.

“The University management received a report that some students violently disrupted meeting of Academic staff at about 1pm on Tuesday, August 20, 2019.

“The management condemns the action of the students for whatever reasons and in whatever guise. The students have no right to disrupt any approved meeting.

“We appeal to academic staff to go about their duties in the assurances of peace and calmness in the University”.
Top Stories