The story has been told of the woman who stunned everyone by giving birth to twins at eleven weeks apart. 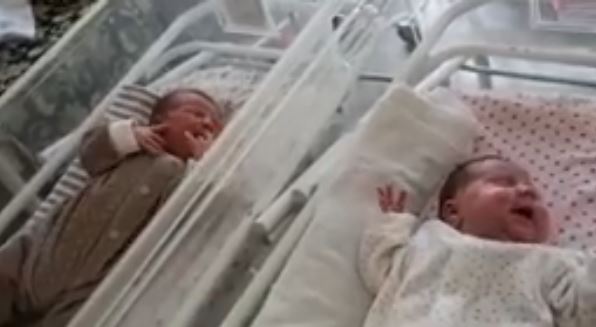 The twins
A 29-year-old woman in Kazakhstan stunned doctors after she gave birth to her twin babies no less than 11 weeks apart, an extremely rare abnormality with one in 50 million odds of occurring.

When Liliya Konovalova, from the town of Uralsk in northern Kazakhstan, walked into the maternity clinic to see the doctors about her second pregnancy, they already knew that she suffered from a rare condition known as uterus didelphys, which basically means she has a double uterus. Doctors had noticed this seven years ago, during her first pregnancy, which had gone smoothly and resulted in the birth of a healthy daughter. This time around the pregnancy was more difficult as she had twins, each of which developed in separate wombs.
On May 24, Konovalova gave birth to a premature girl. She was just 25 weeks into the pregnancy and the baby weighed only 850 grams, which meant she had to spend several weeks in intensive care. Her unborn son, on the other hand, took his time coming into this world, finally deciding to join his twin sister on August 9. Weighing 2.9kg, his mother described him as a true “Bogatyr” (a strong warrior hero from Russian folk tales).

“My son was in no rush to come out into the world,” Liliya jokingly told reporters. “I was shocked when I found out that I had such a condition. I was so worried about the life of my premature baby. But our doctors were great. What they did was a miracle. They showed themselves to be real professionals.”
The young mother and her two babies, both of which weigh around 3 kilograms, are getting ready to be discharged from the hospital.

Liliya’s case was announced as the first such birth in the history of Kazakhstan. Even though separate twin births are rare enough as it is, a gap between babies as long as 11 weeks is even more unlikely.
Watch a video of the twins below:
***
Source: Oddity Central
Top Stories