An Army Captain Is On My Payroll - Notorious Kidnapper, Wadume Makes Shocking Confession


The arrested notorious kidnap kingpin, Wadume has reportedly confessed that an army captain is on his pay roll. 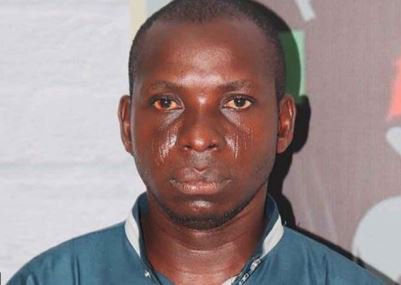 Wadume
Re-arrested kidnap suspect Hamisu Bala (alias Wadume) confessed that he sent huge amount of money to an Army captain, it was learnt on Wednesday.

The army claimed that the battalion mistook the operatives for kidnappers before opening fire on them, killing three policemen, two civilians and leaving five persons injured.

The Nation gathered that Bala claimed to have paid huge amounts into the army captain’s bank account   three weeks ago.

Besides the Captain, the suspect was said to have some other officers on his payroll.

It was gathered that the suspected kidnapper also paid his way through checkpoints.

It was learnt that Bala and his gang avoided arrest by giving N20,000 to security agents each time they passed a checkpoint.

A highly placed source said two of Balarabe’s boys, ”Babaruns”  and ”Zubairu”, called him on August 6  to tell him about Bala’s arrest.

The source said Balarabe, acting on the tipoff, directed his soldiers to “rescue” Wadume.

At the Force Headquarters on Tuesday, the suspect, who was interrogated, was said to have confessed to how Balarabe freed him.

He was said to have told detectives that the soldiers took him to the barracks, from where the Captain allegedly took him to his house, where a welder was invited to cut off the hand and leg chains.

The suspect, alleged to have run three kidnap syndicates in Taraba and Nasarawa states, had a network of major firearms suppliers, it was learnt.

The Police have recovered 13 vehicles and identified several choice properties in Taraba and Nasarawa allegedly bought through proceeds of crime.

The Police also learnt that Wadume owned over 400 cows reared by his boys, who fled with them on learning that their boss had been arrested.

“He has made so many revelations. A lot of things have been said that I don’t want to talk about to avoid jeopardising ongoing investigations. It is a huge network and so many people are involved.

“I can tell you that he confessed to have paid huge money into the Captain’s bank  account three weeks ago and that he usually gave each checkpoint N20,000 each time he passed,” said a source privy to the investigation.

The Joint Investigative Panel set up by the Defence Headquarters to unravel the circumstances surrounding the officers’ killings by soldiers is said to be worried about a trending video of Wadume.
A video of his confession on how he was arrested and later set free by soldiers had been trending in social media.

The video showed Wadume confessing that soldiers took him to their base and had his handcuff removed through the effort of a welder before he escaped.

Sources within the panel said Wadume’s confession had put the military high command in bad light, pointing out that the new development should have been ironed out with the police high command since the investigation was ongoing.

The source, who would not want his name mentioned said: “We are seriously disturbed and alarmed by the latest video on the purported confession of the re-arrested kingpin, Wadume, while in the custody of the police.

“Though it is a commendable effort for the re-arrest of the kidnap kingpin, the video recording of the alleged confession of Wadume while the panel is still conducting its investigation is quite worrisome as efforts are being put in place to ensure smooth relations between the military and the police before the offending confession.

“Though our panel was inaugurated on August 9 with an initial one-week deadline, we have been mandated to continue and conclude the probe as soon as possible.

“The arrest of Wadume would definitely shed more light on our investigation, considering the volume of arrests and interrogations so far.”

Wadume was trailed to his hideout in Hotoro Layin Mai Allo.

A petty trader told our correspondent he was not aware of the arrest.

His neighbor, Mohammed ldris, said he heard the news on the local radio, adding that he was surprised  that the suspect hid in the area.

“There is no way we would have known what was going on because there were no gunshots. The operatives carried out the task silently,” he said.

Residents went about their normal businesses; no one was heard discussing the arrest.

Security agents have condoned off the area.

The Defence Headquarters (DHQ) has appealed to Nigerians to shun comments that could pit the police against the army.

Acting spokesman Onyema Nwachukwu, a Colonel, said the joint investigative panel should be allowed to do its work

He declined comments on Balarabe, saying: ”Our concern should be that the panel does exhaustive investigation and gets to the bottom of the matter. So, I would not like to begin to make comments that would preempt the investigation or its outcome.”
***
Source: The Nation