Prior to the take over on Friday, the APC secretariat had been under the control of the sacked state executive led by Chief Derin Adebiyi. 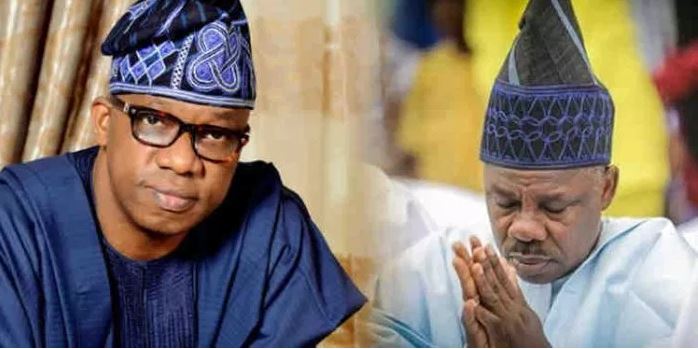 Governor Dapo Abiodun and Ibikunle Amosun
Trouble looms in Ogun state as the Caretaker Committee of the All Progressives Congress (APC) in Ogun, on Friday, took over the party secretariat in Abeokuta, by driving out the sacked executives, backed by Senator Ibikunle Amosun.
The committee led by its chairman, Chief Yemi Sanusi and other executives, party chieftains and security operatives, arrived the secretariat around 10.am, and headed straight to the offices within the complex.
Addressing newsmen after inspecting the facilities, Sanusi, explained that his members were at the secretariat to assess its condition, adding that the committee would swing into action immediately.
Prior to the take over on Friday, the APC secretariat had been under the control of the sacked state executive led by Chief Derin Adebiyi.
Sanusi told journalists that “the authentic caretaker exco put in place by the National Working Committee (NWC) of the party has legally taken over the party structure”.
He expressed displeasure over the present condition of the secretariat, but assured that the committee would give the secretariat a facelift in preparation for the forthcoming local government elections in the state.
According to him, the takeover was in order as the party was expected to swing into action after the general election and inauguration of a new government in the state.
But in a swift reaction on Friday evening, Adebiyi said the takeover of the secretariat by Sanusi-led caretaker committee was “a forceful invasion and illegal occupation by loyalists of Gov. Dapo Abiodun”.
He accused the committee members of storming the party secretariat in a “warlike manner”, accompanied by fierce looking security operatives.
“It is a forceful invasion by the loyalists of Ogun governor. They illegally occupied our secretariat.
“They stormed the offices, drove away our staff and locked the place up. The action is condemnable,” Adebiyi said.
He explained that the matter of the dissolution of his executive committee was currently before an Abuja High Court, wondering why the caretaker committee could not wait for the outcome of the case.
Adebiyi, who insisted that his executive committee was a product of a state congress held on May 2018, declared he and his members would explore all legal means to reclaim the party secretariat.
“We are products of the Congress on May 19, 2018. We are not engaging them like touts, the next court hearing is in October.
“They should have waited. We paid the rent of the secretariat. The caretaker committee has been conducting their businesses in Osoba’s house.
“We are no novice, we have refused to take laws into our hand,. but we will explore all legal means to reclaim the party secretariat,” Adebiyi declared.
He, however, accused the national chairman of APC, Adams Oshiomhole of backing the “illegal caretaker committee” in Ogun and also causing crisis in the party as a whole.
“Oshiomhole is backing this illegal caretaker committee; he has caused serious damages to the party at the national level. Mark my word, Oshiomhole will leave his position with ignominy,” he added.
Amosun’s reaction is unclear as he has formed another party that he controls, although he is the senator representing APC in Ogun central constituency.
Top Stories