They had been placed in a secret room following a fake eviction announcement in a twist by Biggie. 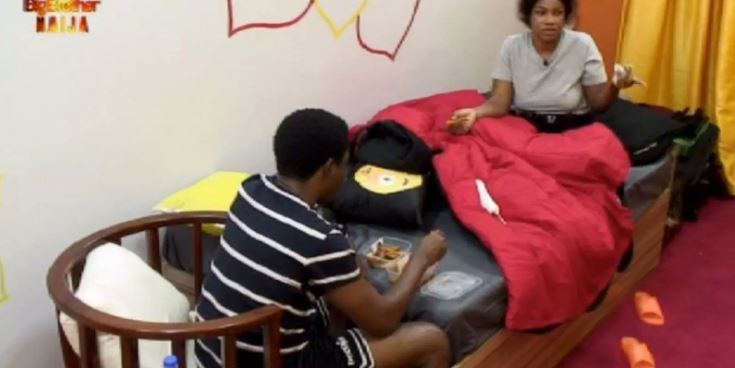 Seyi and Tacha in the secret room
The relationship between Big Brother Naija housemates, Seyi and Tacha will not fail to amaze us.
The two came into the house with different personalities, nobody expected the two to bond. Thanks to the fake Eviction, this friendship would have been nonexistent.
They had been placed in a secret room following a fake eviction announcement in a twist by Biggie.
The Secret Roommate
Prior to their fake Eviction, we really did not see moments of Seyi and Tacha together. In short, the idea of a bond between the two was nearly inconceivable.
Tacha was a no-nonsense lady on whose toes even Seyi dared not step. But to our surprise, their living alone together in the secret room revealed an entirely different side to the two. It was as if they had nurtured secretly being together before.
Since returning from the Secret Room, Seyi and Tacha have been on the lips of the other Housemates. if they were not talking about their changed attitudes, they wondered what the two were up to. Even as this happened, both remained undeterred with their friendship goals.
When we also looked at Tacha’s Diary sessions, we realised she has always picked Seyi when asked who she will like to save if she had the power. Not to forget the moment she also listed Seyi in her top four finalists list.
Seyi has been unfair by refusing to reciprocate this gesture, but at many times he has also stood for her when other Housemates were talking against her.
A Defender
It can be nice having someone to defend you in your absence. This has happened with Seyi and Tacha. Remember Ike’s saga with Seyi. Yes, Tacha was right there pushing her friend to calm down. Even when Frodd started reacting to Seyi’s outburst, she stepped in and stood for him. She told Frodd to rather confront him than talk behind his back.
How is this significant? Well, we found out she never kept quiet about any issue concerning Seyi Awolowo.
Like the other Housemates, Seyi and Tacha have been serving us friendship goals that are not only unique but are also beautiful. And the beauty lies in those special moments both have sat together alone, having interesting discussions about their individuality. Well, as the days roll by, we hope they serve us more.
Top Stories