If You Are Man Enough, Come Back To Nigeria And Challenge Buhari - Adeyanju Dares Kanu


Adeyanju took out time to educate Nnamdi Kanu, noting that respite all his tribulations he (Adeyanju) is still living and criticizing Buhari and his administration in Nigeria. 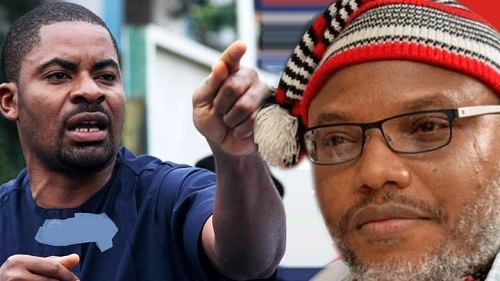 Disclosing this via his facebook handle, Deji frowned at those defending Kanu, and called Kanu a coward that disappeared and abandoned his members when soldiers allegedly came to his house in Abia state.

Displaying how strong and fearless he has become, Deji said he was arrested nine times and imprisoned thrice under Buhari’s administration.

He took out time to educate Nnamdi Kanu, noting that respite all his tribulations he (Deji) is still living and criticizing Buhari and his administration in Nigeria.

His words, “Some of the miscreants defending coward Nnamdi Kanu make me laugh. Small intimidation by Buhari, he compromised, collected money and ran away. If he’s man enough, he should come back. I have been arrested 9 times under Buhari; imprisoned thrice but still here.

“You can’t be saying you want Biafra and you are running away from ordinary Buhari, come back. Come back and confront Buhari like many of us are doing here. Abi, you want to achieve Biafra on Facebook?
We no be mate.

“Was the military not outside Keffi prison waiting to re-arrest me in December, 2018? Why didn’t I run away from Nigeria like a coward? Why didn’t I also compromise & collect dollars?”. 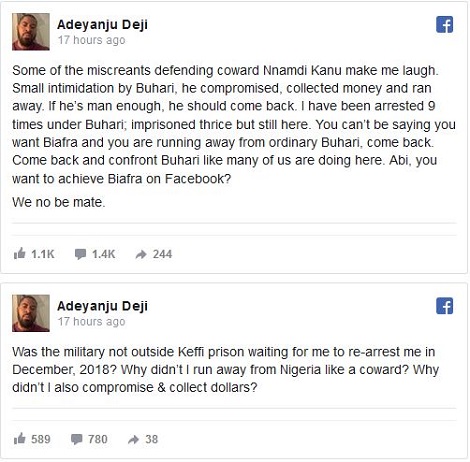 Read his full statement as contained in his facebook handle:

You have heard me say before and I will say again, Nnamdi Kanu is only a business man looking for where to collect money. He is not driven by ideology or love for the igbos. After attacking his fellow Igbo brother, Senator Ike Ekweremadu who played a significant role in ensuring his release from Kuje Prison in Germany, Kanu the businessman has called on some of his miscreants/supporters to attack President Buhari as he visits Japan.

Those who were doubting me when I said Kanu is being sponsored by some element in the North can now see the clear handwriting on the wall. How can any reasonable person openly call for an attack on the president of a nation on foreign soil? Even if you don’t like Buhari or what he represents, at least we must respect the fact that he is the president of our country.

Do you think Kanu does not know the danger of attacking Buhari in Japan. He knows but those sponsoring him are doing everything humanly possible to ensure no Igbo man ever rule Nigeria and also put peace loving igbos in the North in danger by setting them up for reprisal attacks by Buhari’s fanatical supporters.

The other plot is also to use Kanu to divide igbos by creating an atmosphere of war. The plan of the sponsors of Kanu is to provoke the political leaders in the South East, i.e -governors and other elected officials to the point that they will have no other option but to orchestrate attacks against Kanu and his supporters in retaliation. Kanu only worships money and will not stop the verbal attacks on Igbo leaders in as much as his paymasters continue to send him alerts.