Horror! How A Plane Collided With Helicopter Mid-Air, Killing Many People


A plane has collided with an helicopter mid-air in a really terrifying crash which killed many people. 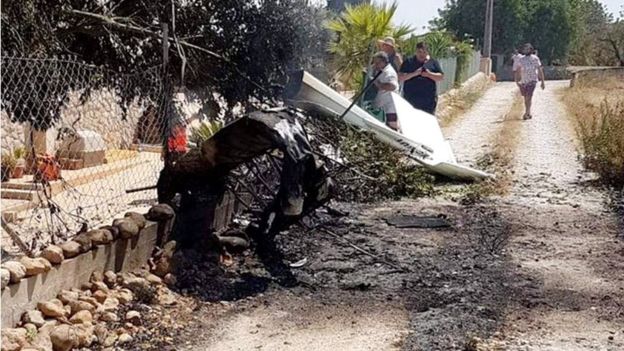 The scene of the crash
A German family of four were among seven people killed when a helicopter and an ultralight plane collided mid-air over the Spanish island of Majorca.

The debris came down on farmland near Inca, in the north of the popular tourist island off the east coast.

The German couple and their two children were in the helicopter, which belonged to Rotorflug, a German firm.

The helicopter pilot was Italian. A Spanish man, from Valencia, was in the ultralight plane with a friend.

The collision happened in the air over the Inca Hospital at about 13:36 (12:36 GMT) on Sunday, local newspaper Diario De Mallorca reports.

Visibility was good at the time, and the cause is not clear. Both aircraft caught fire in the collision, reports say.

The ultralight is a type of small aircraft with a maximum of two seats.
Photos made available from the local fire service showed wreckage from the aircraft in the town. The tail section of one landed on a road, while another photo showed twisted and blackened metal on fire in a garden.

The helicopter involved was a Bell 206 L3 LongRanger, part of a fleet operated by Rotorflug, which provides sightseeing flights for tourists.

A company statement on Sunday said "the cause is still totally unclear".

It said Germany's aviation authority and air accident investigators were now examining the case, alongside the Majorcan authorities.

"All the staff at Rotorflug are deeply saddened and mourn the deceased," it said.
***
Source: BBC
Top Stories