The retired naval captain said Dibia, a lawyer, was instructed by Rena to abduct Dominic, while Abel was a gateman in Diamond's residence. 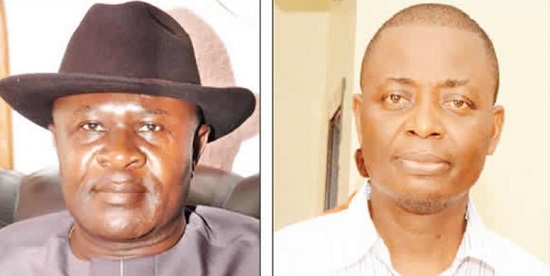 A retired naval Captain, Diamond Onoberhie, has accused his father-in-law, Rear Admiral John Kpokpogri, of kidnapping his four children and relocating them to Canada, where they live with their mother, Ms Rena Kpokpogri.

The four children are Demien, Erhuvwu, Whitney (17) and Dominic Onoberhie (12).

Diamond said upon the dissolution of his marriage to Rena, the children were shared between them.

He added that he was surprised that his father-in-law was still interested in having custody of the only child with him, Dominic.

In a petition by Diamond to the Commissioner of Police, Lagos State, he alleged that Kpokpogri did this to portray him as a childless man, adding that the admiral had also been threatening his life.

According to him, Kpokpogri took all the major and conflicting decisions to truncate his marriage to his daughter in line with his alleged promise to render him useless.

He said, “All these happened because I disagreed with his family about leading my life the way I was brought up in the Christian way. They wanted us to live fake lives. Often times, my mother-in-law was on my neck to live my life like her husband’s. Each time she said this, I always objected to it, asking her to allow me lead my own life.

“It was along the line that I got to know that they lead a pretentious lifestyle, which is contrary to the way I was brought up with a core value of the Christian faith; it is not at this age that I should change that.”

He added that two persons, Eliagu Abel, 25, and Emmanuel Dibia, 48, had been arraigned before the Magistrates’ Court, Yaba, Lagos, for aiding in the kidnap of Dominic.

The retired naval captain said Dibia, a lawyer, was instructed by Rena to abduct Dominic, while Abel was a gateman in Diamond’s residence.

The suspects, who were arraigned on three counts bordering on conspiracy to kidnap, total disregard for court order and unlawful possession of Dominic, pleaded not guilty to the charges preferred against them.

It was alleged that Dibia employed the services of Abel to get Dominic from his father’s residence and took him to his mother in Abuja.

It was gathered that an Ogun State High Court, presided over by Justice A. A. Bakre, in May 2018, granted Diamond the custody of Dominic.

The prosecutor, G. A. Okhliku, said the defendants conspired among themselves to commit the offences and disobeyed an order of the court.

He stated that their conduct was likely to cause the breach of peace contrary to Section 412 of the Criminal Laws of Ogun State of Nigeria, 2015.

According to him, Stella Maris Schools Limited, which Dominic attended, through its lawyer, asked Diamond to withdraw his son from the school owing to the frequent troubles Rena was allegedly fomenting.

The school’s letter to Diamond, which was made available to our correspondent, read in part, “While it is not in our client’s nature to dabble in the matrimonial issues of the parents of our pupils, our attention was drawn to the matrimonial issue between you and your ex-wife resulting in a petition for the dissolution of the marriage with your ex-wife.

“The High Court of Justice sitting in Ogun State granted an order for the dissolution of your marriage; the judge stated thus: ‘I have no problem in holding that the petitioner shall continue to have custody of the third child of the marriage.

“This third child is Whitney Onoberhie, while the respondent also shall continue to have the custody of the fourth child, Dominic Onoberhie, who is presently with him, until both are of age and they can decide for themselves.

“Despite the order of the honourable court, your ex-wife had incessantly fomented uncivilised acts both on the premises of our client and also with our client’s staff.

“While the order of the court only allowed access to Dominic Onoberhie during vacations and public holidays, your ex-wife has consecutively during two visiting days barged in on  the school premises, disrupted the school’s activities and demanded to see Master Dominic Onoberhie, causing untold pandemonium on the school’s premises.

“In the light of the above, we wish to advise that you withdraw your child from the school as the actions of Ms Ovi Rena are unacceptable to our client and pose immense threat to the welfare, peace and general safety of the staff and students of our client.”

When contacted, Kpokpogri told our correspondent that he was in the United States of America for his annual vacation alongside his wife.

Kpokpogri, who described Diamond as an ingrate, asked, “How can I, an admiral and his father-in-law kidnap his children? Is it not funny?

“I gave him my daughter to marry and later turned around to kidnap the children. Is it not funny? It is difficult to imagine the scenario.”

He asked Diamond to go to court if he was sure that he kidnapped his children.

Kpokpogri said, “I’m really embarrassed. What he is saying now amounts to defamation of character and false information. He knows  that he cannot go to court and that is why he is trying to rubbish himself. He served as a captain in the Nigerian Navy. So, nothing like that happened.

“Their marriage was dissolved by the court and the children were shared between them. The children all decided right from the court premises to be with their mother, none wanted to go with him. So, how do I come in there?

He noted that Diamond wanted to embarrass him, adding that he would come up with a detailed response on the matter so that the world would know the facts of the case.
Top Stories