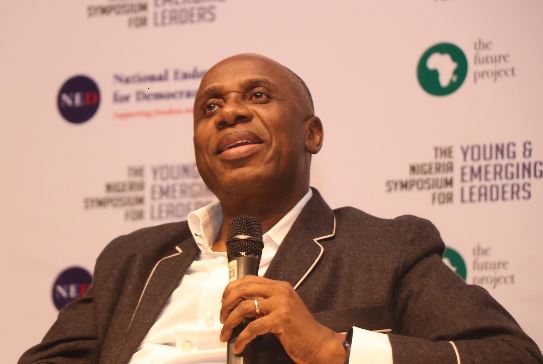 Chibuike Rotimi Amaechi
Minister of Transportation, Chibuike Rotimi Amaechi, has dared members of the outlawed Indigenous People of Biafra to attack him anywhere outside the shores of the country.
Amaechi, in a viral video, vowed to apply self-defence in the face of any such attack.
Recall that former Deputy Senate President, Dr Ike Ekweremadu was recently attacked by members of the Nnamdi Kanu-led organization.
The attack really generated a lot of controversies in Nigeria with politicians coming out to strongly condemn the action of the pro-Biafra group.
The group and its leader have also threatened to vent their anger on any Nigerian politician attending any event outside the country.
They even threatened to attack and disgrace President Muhammadu Buhari who is currently attending a function in Japan.
In the video, the interviewer told Amaechi, who was in a moving train, that politicians are now afraid of travelling abroad and he responded, “What do you mean by that? Scared of who self-defence to Geneva, let them come. You know, there’s what they call self-defence.
“How can you say politicians are afraid of travelling abroad? I’ll go to America, the UK any place I have functions to attend.”
Video: