An ORide operator has been crushed to death in a Lagos community, causing some stir in the area. 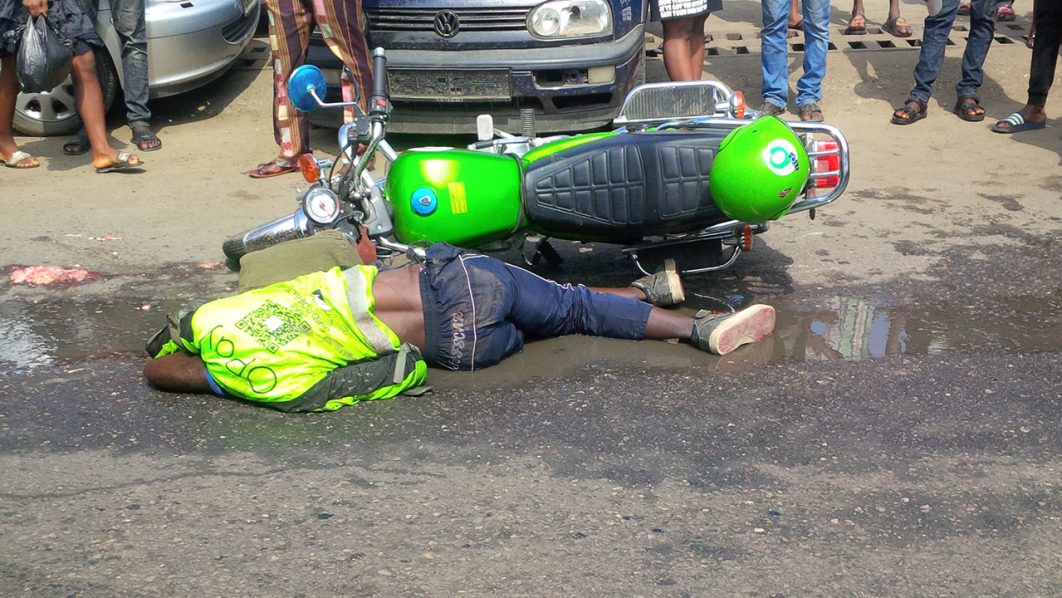 The accident scene
According to a report by TheGuardian, barely 48 hours after a truck belonging to a cement company rammed into a BRT bus killing three and injuring many others in Lagos, another truck conveying cows yesterday crushed an operator of motorbike ride-hailing service, ORide (OPay), to death at Iyana-Itire bus-stop on the Oshodi-Apapa expressway.

The ORide operator simply identified as Sikiru was hit from behind and dragged off from his bike by the truck for a few meters on the one-lane service road inward Cele express. The main expressway had been cordoned off from Toyota bus-stop by HiTech Construction, which is rehabilitating the highway.

The Guardian gathered that immediately after the accident occurred, the truck driver fled from the scene. Policemen from the Ilasa police station chased after the driver, who drove to an area near Apapa, parked the truck and disappeared.
Sikiru, whose name was confirmed by a fellow ORide operator, was said to have only just obtained the new bike with plate number AAB-388VE on Saturday and began operations on Wednesday, the day before his death. It was gathered the company has been reached in a bid to get his address and contact his family.

Describing how the accident occurred, an eyewitness named Williams, said the rider was trying to swerve to the road setback to avoid the fast approaching truck but he was later dragged off the bike and his head crushed by the last wheels of the truck.

He said: “When he turned and saw the speed with which the truck was coming behind him, the Okada rider tried to move sideways for the truck to pass but couldn’t make it as the closeness was too much and the contact dragged him off his bike, getting his head crushed.”

Expressing his anger and grief, an eyewitness who pleaded for anonymity, lamented the slow pace of the construction work on the Oshodi-Apapa expressway. He said the little space left for trucks and vehicles on the service lane was too narrow.

“It’s been three weeks since this road has been cordoned off and the pace of work is slow. I don’t know how many lives would have to go because of this construction. The road left for these vehicles is too small. Recently, a container fell on someone on this same road. Their construction is taking too long.”

The Isolo-Mile 2 route is known for its traffic gridlock since the construction began, with just a lane available for all Cele-Apapa motorists. Attributing the narrow space on the service lane to the spoilt and abandoned vehicles on the roadside, a resident, Abayomi Olusegun, has called for the removal of abandoned vehicles along the corridor. His words: “These parked cars are causing problem. If they are not there, the road will be free a little. They are just dumped here, taking up space that Okadas could have been able to ply comfortably without the risk of death.”

Efforts to get further information at the Ilasa police station on the possible arrest of the truck driver or if the truck sighted at Apapa would be impounded, were not successful as The Guardian was referred to the Police Public Relations Officer at the Ikeja headquarters of the Lagos command.
Top Stories