A new report has claimed that security operatives and INEC officials compromised the 2019 election results. 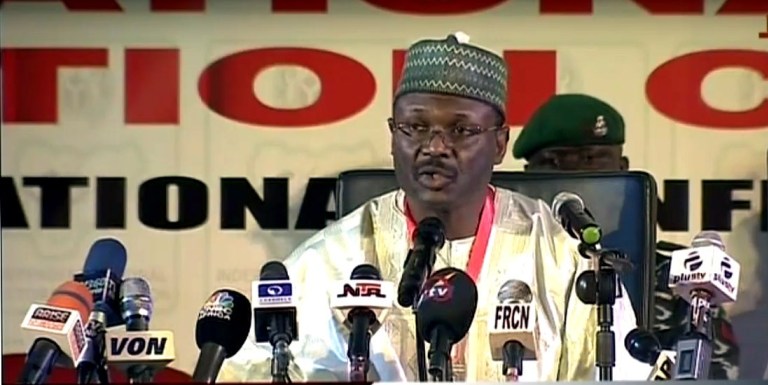 INEC chairman, Prof. Mahmood Yakubu
A post mortem analysis of the 2019 general elections has documented how the collation process of the election results by INEC was opaque, chaotic, vulnerable to manipulation and, in some locations, violently disrupted.

The report, dated July 2019, and made public Thursday by the Centre for Democracy and Development(CDD), also graphically depicted that five states – Lagos, Osun, Kaduna, Rivers and Sokoto – experienced significant problems with the ward level collation.

The CDD relied on reports from its observers deployed across the country during the elections.

The report also identified six challenges which plagued the collation of results of the 2019 election as INEC missteps and misconduct; deliberate denial of access to observers and media; logistical shortfalls; intentional disruption by politicians, political thugs and party agents; and intimidation of collation staff by security agents.

It warned that failure to resolve the challenges which attended the collation of results at the ward centres would embolden election spoilers, weaken public trust in INEC and undermine the credibility of election results.

It said the five states accounted for 46 per cent of incidents of concern, noting that the situation was especially bad in Rivers State, where clashes between political thugs and security personnel, “reflecting de facto proxy battles between top politicians in the state,” disrupted several collation centres.

“Surprisingly, the three states most affected by the Boko Haram insurgency — Borno, Adamawa, and Yobe — were not among the states with very high level of reported collation challenges,” the report observed.

“Kano, Katsina and Plateau — each of which saw voter turnout in excess of one million — also did not record a high rate of collation incidents.”

The report stated that misconduct and mistakes by INEC staff undermined ward-level collation in many locations, especially in cases where the commission’s ward-level officers or ad hoc staff lacked sufficient knowledge of the rules and procedures designed to ensure successful and credible results collation.

“Some staff lacked the basic arithmetic skills needed for timely and accurate collation of results, thereby leading to errors in the result sheets, inconsistencies in collated figures, and delays in the time-sensitive process — the longer it takes to conclude the collation process beyond the stipulated time for concluding the process, the more doubts are created in the minds of voters that something untoward is happening to compromise the integrity of the collation process and, therefore, of the elections,” the report noted.

The research highlighted such states as Kaduna, Ondo and Bauchi, where incompetence of collation officers created errors and delayed the process.

“In Kaduna State, for example, collation was slowed by late arrival of materials and the incompetence of some presiding officers. Observers reported that Governor Nasir El-Rufai returned to his ward collation centre at 6pm on election day to observe the counting of ballots but left out of frustration four hours later as the presiding officer continued to struggle to calculate the polling unit results,” the report said.

“In Ondo State, some ad hoc staff made errors in entering the results in the sheets, causing unnecessary delays and confusion. In one such instance, an ad hoc staff member erroneously entered the House of Representatives result on form EC8B1, but labelled it as the Senate result.”

It further stated that in addition to problems caused by human error, observers also noted several instances of misconduct by officials involved in the collation process.

“In Bauchi State, for example, collation at the largest WCC in the state capital—located at Baba Sidi Primary School in Bauchi Local Government Area (LGA)—was halted for 48 hours due to widespread alteration of polling unit results sheets by INEC and ad hoc staff. Observers reported that the INEC collation officer filled out all of the forms incorrectly using illegible handwriting, resulting in confusion and delays that created opportunities to alter results,” the report submitted.

“Observer reports also revealed widespread failures to follow correct INEC-mandated processes regarding ward-level collation. Many election staff appeared to be confused or lacked knowledge of these procedures. Local and state INEC staff also demonstrated a willingness to ignore procedures. Instead of seeking guidance from their superiors, they readily used their own discretion to change collation procedures and relocated collation centres with little or no notice.”

While highlighting the challenge of denying observers and the media access to collation centres, the report posited that the action cast a doubt on the transparency, integrity, and credibility of the collation process.

“In Delta State, observers and journalists were denied access to the INEC collation centre in Ughelli to monitor the collation of results,” the report said.

“Media reports claimed that a special team of mobile policemen were stationed at the three entrances of the collation centre to prevent observers from accessing it.”

The report pointed out that the disorganisation and poor planning on the part of INEC also hampered ward-level collation activities, stating that in many wards across Nigeria, INEC officials caused confusion, delays and created opportunities for election malfeasance by shifting or failing to clarify the location of WCCs.

“In Abia State, local INEC officials in Aba South LGA were undecided over where to locate the WCC until after the polls closed, thereby creating confusion and significantly delaying the collation process,” the report said.

According to the CDD report, ward-level collation was significantly impacted by the logistical problems that characterised other aspects of the 2019 elections.

“These included inadequate transport for election personnel and sensitive election materials as well as a complete lack of lighting at many collation centres,” the report further stated.

“Given its sizeable budget, it is unclear why INEC was unable to provide basic tools required by the Commission’s ward election officers and ad hoc staff to conduct ward-level collation.

“INEC claims that contracts were awarded for the purchase of necessary tools such as rechargeable lanterns, yet they were not available at most locations.”

On the impact of the activities of armed men on the collation process, the report submitted that in many wards across Nigeria, security personnel were observed intimidating election workers or were alleged to have done so.

It stated that in other locations, security agencies failed to deploy an adequate number of personnel to safeguard election officials and sensitive materials, despite receiving dedicated government funding to do so.

It further stated that in some areas, members of the security forces played an active role in disrupting collation activities.

“In Lagos State, observers at one WCC in the heart of Nigeria’s commercial capital noted that ‘security agents chased everybody outside with guns when the results were being collated,” it reported.

“Elections in several LGAs in the state were heavily disrupted by security agencies tasked with safeguarding the process. As a result, tens of thousands of voters were disenfranchised.

“In Okrika LGA, for example, security personnel invaded the INEC office in the LGA and snatched official collated election results. Before doing so, the same security agents had threatened collation centre officials by shooting their firearms into the air.

“Earlier, during ward-level collation, a team of soldiers led by an army officer suspended collation and ordered his men to take away all materials, including results being collated by election officials.

The report also listed the inappropriate activities of political thugs and party agents as major factors which contributed to collation challenges.

It noted that in some instances, political thugs and party agents unduly interfered in the process, threatened collation officials and generally violently disrupted the collation processes.
“In Akwa Ibom State, INEC cancelled results from five wards in Essien Udim LGA after Senator Godswill Akpabio allegedly attempted to manipulate the outcome of the election, leading to the disappearance of the INEC electoral officer for the area. This delayed collation of the senate election results,” the report state.

The report recommended the clarification of internal guidelines and the improvement of the processes for conducting collation in line with international best practices. It also recommended a transparent and proactive publishing — via the INEC website and through civil society organisations – official results for all election contests, showing a full and accurate breakdown of figures.

It recommended an improved training for junior INEC personnel and ad hoc staff involved in collation activities and the use of permanent signage to identify WCC locations and ensure they are properly equipped with the basic tools needed to undertake collation.
Other recommendations include holding soldiers and other security agents and their commanding officers accountable for unprofessional or illegal conduct while deployed on election duty and the issuance of clear orders to security agents to refrain from obstructing the work of accredited observers and media or preventing them from accessing collation centres.

Political parties were also urged to hold their party agents and other members accountable for their election day actions, particularly those present at the collation centres as well as publishing the names and locations of party agents.

Parties are to discourage the use of political thugs and formalise penalties for party members involved in mobilising and financing them.
***
Source: PREMIUM TIMES
Top Stories