Onyeaguocha, also, said that the state had also placed Okorocha on security watch and urged Imo citizens to arrest him and alert the government whenever they found him in the state. 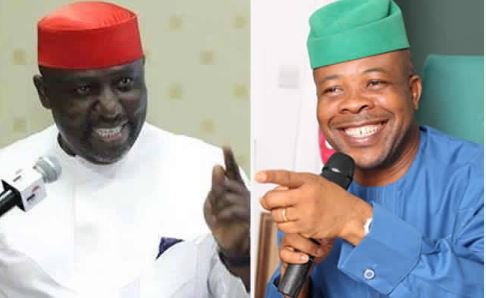 Senator Rochas Okorocha and Governor, Emeka Ihedioha
Ohanaeze Ndigbo Youth Council Worldwide, OYC, has reacted to Senator Rochas Okorocha’s citizens arrest by the Imo State Governor, Emeka Ihedioha.
ABACITYBLOG reported that the Secretary to State Government (SSG), Mr Uche Onyeaguocha, gave the order after the Chairman of the Recovery of Government Properties, Mr Jasper Ndubuaku, was allegedly assaulted at Okorocha’s residence.
Onyeaguocha, also, said that the state had also placed Okorocha on security watch and urged Imo citizens to arrest him and alert the government whenever they found him in the state.
However, reacting to the news, OYC said, order to arrest Okorocha by the Imo citizens is an invitation to anarchy and may plunged the state into chaos which the federal government may have no other option than to declared a state of emergency in Imo.
The statement signed by Mazi Okechukwu Isiguzoro, further revealed that the order is an invitation to Anarchy capable of truncating the Democratic Government of Governor Ihedioha if not reversed immediately.
“We envisage that such a “Citizen’s Arrest” Order is time bad as the Governor is planning to celebrate his first 100 days in office irrespective that we condemned the assault of the Imo Chairman on Asset Recovery Committee, Hon Jasper Ndubuka by thugs allegedly working for Senator Okorocha, but We call on immediate intervention of the South East Governors and Igbo leaders as We ask Imo State Religious leaders, Traditional Rulers, State House of Assembly to Join Ohanaeze Ndigbo Youth Council Worldwide to interface with Governor Ihedioha and Senator Rochas Anayo Okorocha, and Urge Imolites especially the Youths to suspend any action impending on the outcome of the peace parley with the duo.
“Ohanaeze Ndigbo Youth Council Worldwide beg Senator Rochas Anayo Okorocha to stay away from the state at the moment until the dust settles down, we believe that Governor Ihedioha will see the wisdom and rescind on the decision to arrest Okorocha, and Urge him to suspend the activities of Jasper Ndubuka committee on recovery Govt assets until the situation is under control, We will not allow any South East State to be under control of a sole administrator Under State of Emergency, Ohanaeze declared.
Top Stories