A man who used to be very stubborn as a child, has grown to become very responsible, even bagging a PhD. 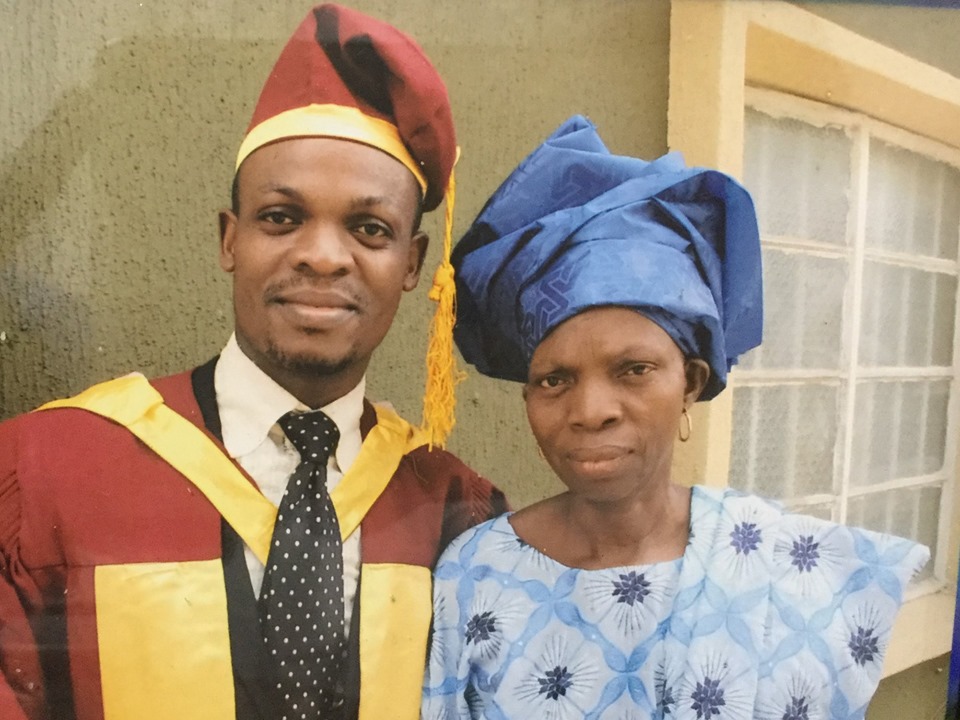 Ezekiel Olusola Adekanmbi with his mother

A Nigerian PhD holder has shared his inspirational story just after bagging the highest university degree from an American university.
Reflecting on how far he has come, Ezekiel Olusola Adekanmbi disclosed that he grew up without his father as he died shortly after he was born. He further disclosed that he became a prodigal son by occasionally moving out of their home when he was just 10, sleeping in the markets and sometimes in the mosque or the church beside their house.

Things however changed after he learnt how to play the piano at the age of 14. According to the Nigerian man who bagged a PhD in Chemical Engineering, he gave his life to Christ at that age and everything turned out right.  Adekanmbi also dedicated his certificate to his mother who despite making a profit of N120 ($0.3) per day from her business, trained him and his 4 siblings beyond Secondary School.

He wrote: "GOD HAS A PLAN FOR EVERY CREATURE, ESPECIALLY ME!

"I received my PhD certificate in the mail today and could not hold back my tears. I kept reflecting on how my mother would make me hawk 2 dozens of bread every morning before heading to middle and high schools. She didn't have money but wanted the 5 of us to go to school. I grew up without a father. In fact, I saw my father only 3 times before he died. It is not good to be born in a poor home neither is it good to grow up without a father.

"I chose the path of the prodigal son by occasionally moving out of our home at age 10, sleeping in the markets, and sometimes in the mosque or the church beside our house. However, whenever I decided to go back home, my mother would ring it in my ears; "Education is the only way out of our pathetic situation. My son, read your books". Every now and then, people would come to her that her son had destroyed one thing or the other. She beat the hell out of me. But the more she beat me, the more my heart became hardened. I just wanted to be independent of her. Her rules were too stringent. At age 14, things turned around. I had learnt how to play the piano. The more I played songs of praises and hymns, the more my mind became renewed, the more I listened to my mother and the more I allowed God to work through me. I gave my life to Christ, and was confirmed into the body of Christ at Christ Anglican Church, Ogere Remo, Ogun State, Nigeria. Today, the rest is history. I am now a PhD holder!!!

"This certificate is dedicated to my mother. Despite making a profit of N120 ($0.3) per day from her business, she sponsored the five of us beyond high school. God has a plan for every living creature. No matter how stubborn and anti-Jesus your child may be now, with prayer and trust in God, your child will come back home. It is written, every knee shall bow and every tongue shall confess that Jesus Christ is Lord. The Lord that changed Saul to Paul can change your son in the same manner he changed me. It pays to give ones' life to Jesus and allow Him to take over. Thank you Lord, for your blessings on me!!!"
Top Stories