The survivors of the Ikorodu auto crash have opened up on how they narrowly escaped tragic death. 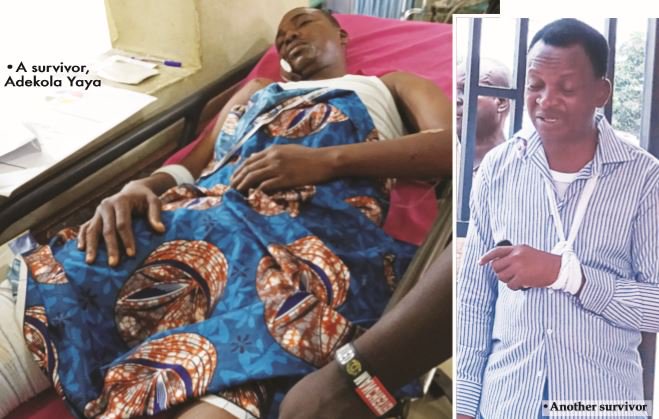 Some survivors
Residents of Ikorodu, a suburb of Lagos, were on Tuesday confronted with the sight of a fatal accident involving a truck in the fleet of Dangote Group and a BRT bus in Majidun area of the community.

The Dangote truck, which was fully loaded with cement, was said to have had a head on collision with the equally loaded passenger operated by Primero Transports Service Limited.

No fewer than three people reportedly died in the accident while more than 50 others sustained various degrees of injuries. The passenger bus was said to have been boarded by commuters on their way from Ikorodu to Lagos Island.

But they had not left the borders of the Lagos community when the accident occurred.

Some of the victims on admission at LASUTH were still trying to come to terms with the accident when our correspondents visited on Thursday.

Still writhing in pains from the injuries they sustained in the accident, they said it was not impossible that a few of the passengers might have opted for treatment at private hospitals. In the different hospitals our correspondents visited, it was observed that the authorities of the hospitals had built heavy security around the victims.

At the surgical emergency ward in LASUTH,  Adekola Nurudeen Yahaya was seen groaning in pains on his narrow bed. He was surrounded by several other injured victims who had suffered similar fate.

Yahaya had stitches all over his body while his shoulder and leg were so heavily bandaged that he could barely move them.

He had lay in the bed for two days and had to urinate on his bed with the help of a nurse if he was pressed.

Yaya, a businessman, was on his way to Victoria Island for a business transaction when the accident occurred. Like other survivors our correspondents spoke with, he could not recall what happened except that he heard a loud bang and found himself being pulled out of the wreckage the passenger bus he boarded had become.

Next, he found himself in the hospital. Asked if he was happy that the Lagos State Government would pick the bill for his treatment, he nodded in the affirmative, groaning as he tried to move his body.

Lying next to Yahaya was Ola, an official of the National Open University (NOUN) with head office in Victoria Island. Ola, as he strenuously identified himself, was on his way to the office when the accident occurred.

The heavily built survivor had fractured a leg and had it heavily bandaged. Ola groans with every slight movement of his body. His wife spends most of the day with him, abandoning her own job. His colleagues from NOUN, who were there on sympathy visit, said they had been praying for him to get well soon.

Like Yahaya, Ola could not recall the events that culminated in the accident. He wouldn’t even be bothered at the moment as he could hardly open his mouth to mumble words except when he was being tended by his wife. At the Ikorodu General Hospital, the scale of the injuries sustained by the passengers was not different.
Particularly pathetic was the case of Adedeji Odukoya who had heavy bandages around his head, neck and leg. But his family members and friends who were there on a visit shared with our correspondents the case of a victim of the accident at Gbagada General Hospital whose condition was said to be worse.

“We shouldn’t be complaining at the sight of the injuries. What we should be doing right now is to be thankful to God that these ones are still alive. That is because some people actually died!”

A banking consultant, who said he would rather not mention his name because he hails from a popular family in Lagos, was thankful to God for surviving the accident.

Among those who were being treated in the accident ward in Ikorodu, he was about the only one that could move around. But then he sustained a major hand injury and another wound on his leg. He was, however, in good spirits when our correspondents met him, as his wife cheered him up and encouraged him. Some of his friends were also there by his side.

He said although he did not have a broken leg or broken head like many of the accident victims, his bandaged arm was awaiting the plastic of Paris (POP) because it was fractured.

He said: “I am thankful to God. I am hoping that the bandage on this arm will soon be removed and replaced with POP like the doctor said.”

Volunteering a clearer picture of how the accident occurred, he said the Dangote truck was going to Ikorodu from the opposite direction only to climb the road divider into the opposite lane. He said the impact on their own vehicle was much as it rammed into the driver’s side.

He recalled that immediately the crash occurred, he became weak. He looked around him and saw casualties of the accident. He discovered that he could not lift his body and noticed that people were trying to force the doors of their bus open in order to get inside.

He said: “Next thing I saw was that the girl beside me was dead. I saw a young man come close to where I sat. My head was throbbing and I was weak. The young man bent over in the confusion that followed and picked my phone which had rolled away from me to the floor of the bus. I wanted to scream and jump on him but I had no strength. I could not even muster enough energy to open my mouth.

“That was when I saw a laptop that was owned by a man not too far away from me. It was on the floor. Somehow, I summoned the strength to use my leg to pull away the laptop so that the boy who stole my phone would not see it and take it too. Thereafter, we were rescued and taken to this hospital.”

He said he was actually on his way to Lagos Island for a business appointment. His wife, who was all smiles, said it had been difficult for her to break the news of the bus accident to her motherin-law because she did not want the woman to panic.

She was, however, full of thanks to God for keeping her husband alive, waving away the fractured arm as a minor thing.

Meanwhile similar to what took place at LASUTH, grateful to the government for volunteering to foot the medical bills of the accident victims. Government officials were seen encouraging the victims.

A huge entourage from the Ministry of Health in Alausa, Ikeja stopped by at the General Hospital in Ikorodu to see the survivors.

Relations of the survivors who spoke with our correspondents were grateful to the state government for offering to foot their medical bills.
***
Via The Nation
Top Stories