It was said that the traffic situation was a major challenge to road rehabilitation in the state, Nigeria's commercial centre. 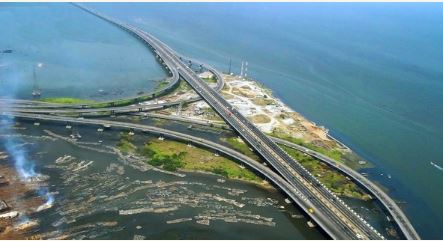 Lagos State records more than 70 per cent of Nigeria’s vehicular traffic, in spite of its small landmass. The Federal Controller of Works in the state, Mr Adedamola Kuti, made the observation in an interview with newsmen in Lagos on Sunday.
Kuti said that the traffic situation was a major challenge to road rehabilitation in the state, Nigeria’s commercial centre. He called on the motoring public to cooperate with contractors handling road projects to enable timely completion of the projects.
“There is no alternative to having a motorable road; we realise that many times it is the road we want to fix that motorists have to pass through.
“Managing traffic to allow road rehabilitation is a problem for us; we appeal to the public to realise that there is no gain without pain.
“We appeal to motorists in Lagos to cooperate with us and with traffic management agencies during road rehabilitation.
“If vehicles are diverted to another route during road rehabilitation; we urge motorists to please cooperate; it may be inconvenient but the situation will not be forever,” he said.
Their controller said that It was essential to make roads better for the citizens. He urged media organisations to help to educate the public on the need for the cooperation, saying that the Federal Government prioritised infrastructure development and needed public support.
“Where we need to work at night, we have been doing that. For example, the entire surfacing of the Third Mainland Bridge was done at night.
`’The work we did at Outer Marina was done throughout the night, even the Dorman Long at Ojuelegba was done at night,’’ he said. The controller said that the Federal Ministry of Works, Housing and Power had zero tolerance for illegal occupation of bridges.
“We are not going to tolerate any form of business under bridges. Infrastructure must be protected; therefore, illegal businesses there must go.
“The public is not allowed to sell petroleum products under the bridges.
“These are not what we should allow, and we will keep reporting to the appropriate authorities to see how we can dislodge these illegal occupants.
“Illegal activities undermine the strength of our bridges,” he said.
Lagos is the smallest state in Nigeria, having a land area of about 3,345kmsq. The state claims to have a population of about 17.5 million.
Top Stories