Some presidential campaign posters of Nasir El-Rufai and Adams Oshiomhole have been spotted in Lagos. 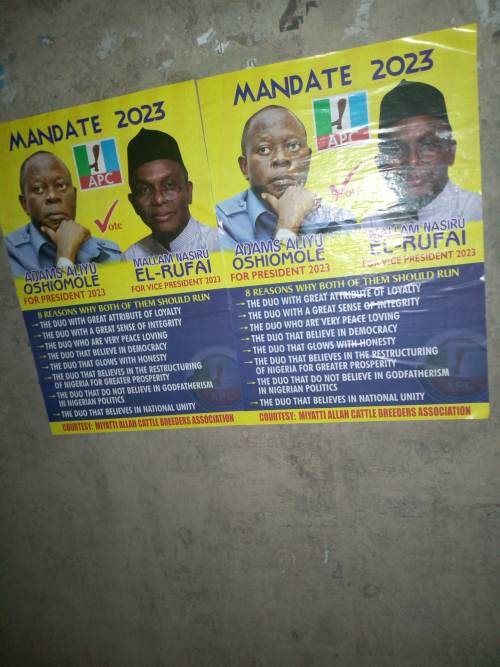 The posters
In less than four months after the swearing-in of the incumbent President Muhammadu Buhari, presidential campaign posters and billboards of politicians have been found in various places across the nation.

In July this year, two large billboards with the picture of Bola Tinubu, an ex-governor of Lagos State and a national chieftain of the All Progressives Congress with the inscription, 'BAT 2023' were found at the top of a tall building very close to the Lagos Government House in Alausa, Ikeja.

Recently, presidential campaign posters of Adams Oshiomhole an ex-governor of Edo State and the current national chairman of the APC, and El-Rufai, a former minister of FCT and incumbent governor of Kaduna State have been sighted around Stadium area in Surulere, Lagos State.

THE DUO WITH GREAT ATTRIBUTE TO LOYALTY

THE DUO WITH A GREAT SENSE OF INTEGRITY

THE DUO WHO ARE VERY PEACE LOVING

THE DUO THAT BELIEVES IN DEMOCRACY

THE DUO THAT GLOWS WITH HONESTY

THE DUO THAT DOES NOT BELIEVE IN GODFATHERISM IN NIGERIAN POLITICS

THE DUO THAT BELIEVES IN NATIONAL UNITY