A fraudster in the Federal Bureau of Investigation list has been arrested by men of the EFCC. 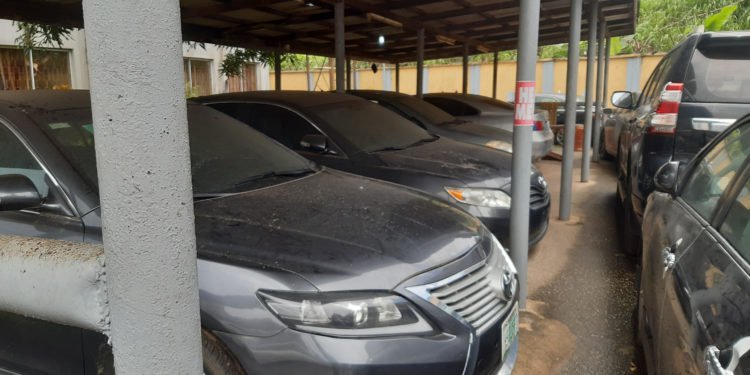 Cars recovered by EFCC agents
The Economic and Financial Crimes Commission (EFCC) said its collaboration with the Federal Bureau of Investigation has led to the arrest of a female suspect cyber fraudster in Edo State.
It said the female suspect (names withheld) worked in collaboration with foreign counterpart in dark web.
Head of Benin Zonal Office who spoke on behalf of Acting Chairman of the EFCC, Ibrahim Magu, Muhtar Bello, said the female suspect was involved in obtaining and stealing people’s identification information which she forward to her American collaborators.
Bello said her American collaborators used the information to file for fraudulent tax return with the Internal Revenue Service.
He stated that the suspect received her CT through Bitcoin and about 185 Bitcoin currently worth N656m was traced to her.
The EFCC Zonal head said it independently arrested a cybercriminal and two siblings involved in Business Email Compromise (BEC).
Bello outlined their operandi as searching for victims’ email addresses especially official Business Email addresses; create a phishing link and compromising the process in order to defraud unsuspecting victims.
According to him, “The three suspects will have their date in court soon. We do not want to state the woman’s name so as not to compromise investigation.
“The Commission is resolute in exterminating cybercrime and bringing to book all those involved in this despicable activity.
“As part of our strategic plans to tackle this malaise, the Benin Zonal Office, from January to date, through intelligence raided the hideout of internet fraudsters in our jurisdiction-Edo, Delta and Ondo States.
“These raids led to the arrest of 113 internet fraudsters. While the prosecution of many of the cases is ongoing in court, we have so far secured 53 convictions in the period under review.”
Over 30 exotic cars, charms, laptops, mobile phones, flash drives, according to him, were recovered from the suspects.
Top Stories