Nigerian Man Kidnapped In Malaysia For Refusing To Share US$49,000 Proceeds From Love Scam (Photo)


A Nigerian man has been kidnapped by his colleagues after he refused to share proceeds of their crime. 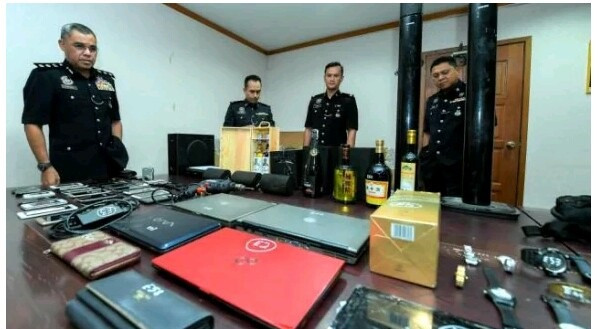 Expensive materials recovered from the scammers
A Nigerian man who refused to share with his accomplices proceeds obtained from victims of a Love Scam syndicate was kidnapped by his countrymen in Batu Caves last Saturday.
However, he was rescued by the police following raids at two hotels, in Mahkota Cheras and in Selayang.
The victim, aged 32, was reported to have been kidnapped by six Nigerian men in two Honda City cars.
Gombak district police chief ACP Samsor Maarof said in the raid in Mahkota Cheras, police arrested three men and a woman, while another two men were arrested in Selayang.
“All those arrested are Nigerians, aged between 21 and 35. The victim was found safe,” he said on Sunday.
He said the Nigerian who was kidnapped had valid travel documents, while the six who were arrested did not possess valid travel documents.
It was found that the victim was kidnapped for refusing to distribute US$49,000 (RM206,559) which they had obtained through the Love Scam activities, he added.
Top Stories