Bello insisted that his administration had cleared all salary arrears owed workers in the state, despite inheriting them. 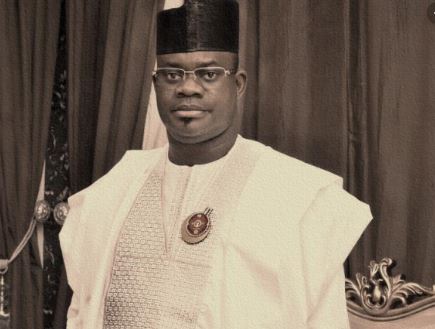 Kogi State Governor, Yahaya Bello
The Kogi State Governor, Yahaya Bello has declared that Civil Servants in the state are not owed salaries.
He said his administration was up to date in the payment of salaries.
Bello insisted that his administration had cleared all salary arrears owed workers in the state, despite inheriting them.
Speaking with reporters after a meeting of the National Working Committee (NWC) of the All Progressives Congress, APC, in Abuja, he disclosed that President Muhammadu Buhari gave him a bailout of about N30.8 billion to clear salary arrears of workers in the state.
According to Bello, he had fully applied the bail-out fund to clear salaries and pension arrears.
He said: “As regard the issue of news making the round that Kogi State is owing salaries, I want to categorical state that, my two predecessors inherited salary arrears.
“It is a problem I inherited when I assumed office. But I want to announce to you today, that Kogi is not owing any worker’s salary at all. We have been able to clear all workers’ salaries and we are up to date. As a matter of fact, the last primary election that was held on August 29, we paid the salaries of August. That is to tell you that we are up-to-date as far as salary is concerned.
“The issue of us owning up to 38 months’ salary arrears before we cleared it was all false and lies. We did owe up to that, what we were owing at that time was between four to five months.
“As I speak with you now, Mr. President graciously approved a bailout of N30.8 billion for us and our national chairman seated helped me to facilitate the release. We are not owing any salary.”
Top Stories