The Nigeria international has been rewarded for his impressive start to life in the French top-flight having scored four goals in four games. 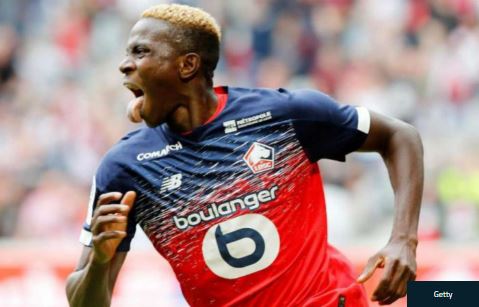 Victor Osimhen
Following his fine goalscoring run in the French Ligue 1, Victor Osimhen has been named Lille Player of the month for August.
Osimhen heralded his arrival in France by scoring four goals for the Great Danes in his first four games.
The 20-year-old bagged a brace against Nantes to help Lille secure a 2-1 win on August 11 and another brace as they romped to a 3-0 victory over Saint-Etienne a week ago.
Osimhen joined Christophe Galtier’s side in July as a replacement for Ivory Coast’s Nicolas Pepe who left for Arsenal.
He is expected to link up with Gernot Rohr’s team in Dnipro where Nigeria will take on Ukraine in an international friendly on September 10.
After the international break, Osimhen will be aiming to continue from where he left off when Lille host Angers for their next Ligue 1 fixture on September 13.
Top Stories