Onyekuru became the latest player to withdraw from Nigeria’s squad, after Wilfred Ndidi and Tyronne Ebuehi opted out. 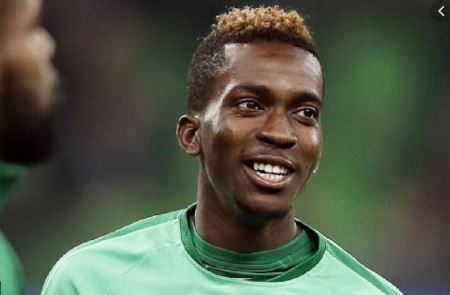 Henry Onyekuru
Head coach of the Super Eagles, Gernot Rohr, has called up Club Brugge’s forward, Dennis Bonaventure, as a replacement for Monaco’s Henry Onyekuru, ahead of Tuesday’s international friendly against Ukraine at the Dnipro Arena.
Onyekuru became the latest player to withdraw from Nigeria’s squad, after Wilfred Ndidi and Tyronne Ebuehi opted out in order to recover from their injuries.
Defender Kenneth Omeruo is still processing his work permit in Spain.
Onyekuru, who joined Monaco from Everton permanently this summer, cited his inability to secure a resident permit as the reason for withdrawal from the encounter.
“It is true that I won’t be available for the match against Ukraine next week due to resident permit.
“I only arrived here less than a month and I’m yet to get my resident card, so if I leave now I won’t be able to return and will then have to apply for another visa to fly back to France,” Onyekuru told AOI Football.
Bonaventure joins Rangers midfielder Joe Aribo, Bordeaux forward, Josh Maja and Fortuna Dusseldorf goalkeeper Maduka Okoye, as the new invitees who will be aiming to make their Super Eagles debuts against Andriy Shevchenko’s men.
Top Stories